Power to the People

United States v. Windsor has  been decided, and there are important and far-reaching consequences to the decision.  I usually refrain from getting too political here, preferring to suggest general ideas about freedom and personal responsibility, but I am perfectly willing to call Democrats liars when the need arises.  Since the Republicans are the primary party lying now, I am absolutely willing to treat them the same.

Issue: Edith Windsor and Thea Spyer married in Canada in 2007, and moved to New York, which recognized the marriage as legitimate.  When Ms. Spyer died in 2009, Ms. Windsor was forced to pay over $365,000 in estate taxes because the Defense of Marriage Act excluded same-sex couples from the definition of marriage.  The IRS refused to refund the tax.  Ms. Windsor then sued because her 5th Amendment equal protections were being denied.  The US was not willing to defend the legality of DOMA in court, but still refused to pay the refund.

Who's lying: I have unfortunately been frequently listening to CSPAN radio while in the car, and since politicians are primarily the ones speaking, I hear a lot of lies.  In this case, some of the most blatantly false statements I have heard in years are being voiced by Republicans.  I heard several different Republican representatives say, with sincerity in their voices, that the Supreme Court had removed the right of states to decide what laws were proper for that state's residents.

This is the opposite of what happened.

Most of my readers, and indeed, most people who share any ideas with me at all, believe the Federal government has grown much too large and intrusive into states' business.  These principles apply even if a particular Federal law enforces an idea you believe in, and DOMA is a terrific example of this.  DOMA removed states' rights, refusing to acknowledge at the Federal level an agreement (marriage) that has always been granted by each state.

United States v. Windsor is a victory against intrusive politicians.  It is a victory for states over our Federal government's overreaching powers.  It is a victory for individual rights.  It is a defense of our most basic and important legal document, the Constitution. And all of those things should be celebrated, no matter which consenting adults you choose to have sexual relations with, or not.

Consequences and the Nanny State

I like recycling when possible, whether it's just things like aluminum cans or actually turning something that's being thrown away into something useful.  I compost in a minor way, dumping all of my used coffee grounds, cigar remnants, plain white shredded paper, and sometimes bits of vegetable matter like seeds and stems into the planters on my patio.  Here is a picture of one of my planters, enriched with coffee grounds, and planted with seeds taken from peppers I ate.


This NY Times story from 16 June tells of a plan by New York mayor Bloomberg to compost food scraps in the Big Apple.  Hey, I'm something of an New Millenium guy, who likes alternative energy, "lower footprint" living, and thinking outside the box- I should love this, right?  But I don't.

With any form of recycling, there are potential drawbacks.  The blue bins in front of my apartment complex are for recycling, but every damn time I drop some cans or bottles in those bins, I see some dumbass has dropped some boxes in there, because some folks are too friggin' stupid to take two seconds to look at the illustration on the bins showing what they do take.  Some of the boxes will be cardboard, which some recycle locations (not ours) collect, but sometimes there are waxed paper boxes, which almost no-one accepts.  After our recyclables are collected, someone at the recycle location will have to go through and separate out all the extra crap that dumb asses threw in, thinking they were "helping".  On my patio, I know that I can toss in a few stems or onion skins at a time, but that if I dump a lot of food scraps, I will have an insect problem, which will lead to a sanitation problem.  I can't even dispose of all my personal food left-overs this way, much less M or RC's.  Now, think of all the potential sanitation issues of collecting food scraps from an entire city.

Bloomberg has been one of the strongest driving forces behind recent so-called gun control efforts in the United States.  Disinterested people outside the debate frequently say things like, "But is it really that big a deal?  Do you need 30-round magazines?"  There are several different issues to deal with in those questions, including the US legal ruling that able-bodied males (not in an organized military force such as the National Guard, Reserve, or active military branches) between 17 and 45 years of age comprise the unorganized militia.  Outside of those questions, and the obvious difference between the government's ability to control what I want to have regardless of need, you have the true root of the problem.

Probably the single most damaging idea to our freedom and ultimately preserving our national way of life is the mistaken idea that it is the Federal government's job to take care of our citizens.  In 1935, the Social Security Act was passed. This set the stage for the Federal government's assumption of a duty to take care of whole classes of people.  This, and so many other harmful pieces of legislation, all arguably stem from the somewhat nebulous meaning of the phrase "general welfare".  A particularly important note was made in the 1936 United States v. Butler case:

If the novel view of the General Welfare Clause now advanced in support of the tax were
accepted, that clause would not only enable Congress to supplant the States in the regulation
of agriculture and of all other industries as well, but would furnish the means whereby all of the
other provisions of the Constitution, sedulously framed to define and limit the power of the
United States and preserve the powers of the States, could be broken down, the
independence of the individual States obliterated, and the United States converted into a
central government exercising uncontrolled police power throughout the Union superseding all
local control over local concerns.

The Social Security Act was unconstitutional, and was not overthrown only because FDR attempted to "pack" the Supreme Court with additional appointees, thus pressuring the sitting justices to rule in his favor.  The whole sordid story can be found here.  The passage of the Social Security Act, and acts based on similar thought, have led to a de facto system of economic slavery lasting four or five generations, slavery that is in some ways more soul-crushing and dignity-robbing than the evil practiced 150 years ago.  The net results have been higher crime, economic blight, national debt, and the loss of perhaps our single biggest national strength, individual self-reliance.  The passage of the Social Security Act started us fully down the path to socialism.  The question remains as to whether it is too late to salvage our great nation.

Does our national government have the ability to determine what is "best" for each of its citizens?  No.  Further, it doesn't have the right.  We must take what actions we can to regain our individual self-reliance.  I moved out of my parents' house at 21.  I don't need a committee of parental units in Washington deciding what I should do, and enforcing those decisions with the enormous power of the Federal government.  This country started with a national system of checks and balances.  Each of us must immediately work to help our state regain its share of autonomy from the Federal government.  We must support initiatives to reduce the size of the Washington bureaucracy from its current bloated size to an efficient, useful structure that is truly balanced with our local and state governance.  And we must do it now, while we still can.
Posted by J.R.Shirley at 1:20 PM 5 comments:

Triple Tap, 2010.
Trip Tap is really two movies that director Tung Shing Yee foolishly tried to combine.  First, there is a fairly straightforward story about a world-class handgun shooter who stumbles into a bank robbery as he's returning from a competition.  This movie is extremely valuable, and it deals with some very important concepts: combat mindset, survivor's guilt, societal responsibility, and when moral people choose to act.  It shows a lot of knowledge about shooting in general, and also displays some of the best technical knowledge I've seen in a movie, some of it specific to the Asian market (for instance, Airsoft replicas are huge in Asia, and some of them are close enough in construction for parts to exchange with real firearms- the ATF has prosecuted at least one importer of M16 Airsoft replicas because the receiver can be used to build a working AR15 or M16).  My only complaints are that muzzle discipline during the competition could have been better, and that the third round of a "triple tap" doesn't go next to the other two.  This movie ends after a court scene.
4.5 of 5 stars

The second movie in Triple Tap is a psychological detective thriller.  In this movie, there's a good bit of implausibility in general.  All the technically correct elements of the first movie are gone, replaced by typical Hollyweird nonsense like shooting weapons out of people's hands.
2 of 5 stars

If you take this movie as a whole, it averages out to a reasonably respectable three stars, which isn't bad for a Hong Kong flick.  I don't think this is truly fair, though, because the first half or so, extending to the end of the hospital scene, is great.  It tells a complete story, and if you only ever watch this part, I think you'll enjoy this movie despite the subtitles and get a good deal of food for thought.
Posted by J.R.Shirley at 1:26 PM 2 comments:

Brigid has a nasty habit of tempting her readers with beautiful snapshots of her cooking, so blame her influence.

Place a 12" skillet on the stove, and turn heat to low.  Dice onion and add to skillet.  Add bacon.  Cover skillet.  Slice potato into slices a little thinner than 1/4".  Dice habanero, taking care not to touch the inside of the pepper.  (You can use a glove, or hold the pieces you're cutting down with a fork.)  Stir onion and bacon to ensure they're not sticking and distribute the bacon grease.  Turn up heat slightly, if onions are not browning already.  Add chicken, habanero, and potato.  Cover again.  Stir often enough to keep from burning, and cook until potatoes and chicken develop a nice color.

Note: regular bacon can be used, but 3 slices of center-cut bacon will result in only 7 grams of fat in this entire skillet, which feeds 2, if you accompany with some rabbit food.  Serve with a good barbecue sauce, and cold beer. 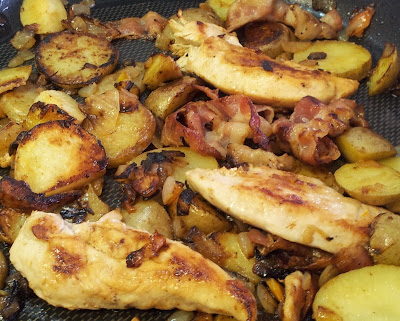 I've been meaning to make this sauce for a while.  Despite the name, it's only middling-hot for real pepper heads.  I promised a friend I would make some toned-down sauce for dinner tomorrow night, so that recipe follows, for you wusses.

Add juice to blender.  Slice habaneros, removing seeds (keep the seeds if you want a lot of heat).  Take care not to touch inside of peppers.  Add all ingredients to blender, and emulsify, taking care not to let any of this mixture splash into your eyes.  Also, I do not suggest you inhale deeply over the open blender, unless you're trying to clear up nasal congestion.  If you want more pine and less suffering, recipe follows.