Home from the Hill

I know I've been quiet for a longer-than-usual time.  I had a four day battle assembly, and drove in two days early to assist in last-minute prep for the exercise.

I find it funny that the preparation for the exercise was more stressful than the actual exercise.  Also, I freaked out a staff sergeant on the last full day of the exercise.  I was playing a displaced civilian, angry because my family was hungry and without shelter.  I had no weapon, and was not even moving especially fast.  The rules for the exercise mandated no physical contact, so I was annoyed when the SSG gave me a very hard shove.  I knocked his arm off me while I stepped to the side, and advised that if he touched me again, I would subdue him.

His eyes got wide.  "Are you serious?  Index!" ("Index" indicates the end of the exercise, which the SSG did not have the authority to call.)

Anyway, I'm in the "recovery phase", which involves HALO and beer.  I did have some hard truths brought home once again.

1.  Be prepared.  I brought almost no "snivel gear" out with me because it was so late in the season, but temperatures were in the 40s most of the time.

2.  Bring (and drink) water.  My E5 got dehydrated after spending a good part of the day out of the range.  Just because it's not hot doesn't mean you shouldn't be hydrating.

3.  Protect yourself at all times.  It is easy for emotions to get out of hand when practicing against an opposing force, especially if soldiers have not performed this type mission before.

4.  Give yourself time.  This is especially important when it comes to convoys.  Moving large groups of people simultaneously can be frustrating.  Try to figure out all the ways things can go wrong, and plan for them. 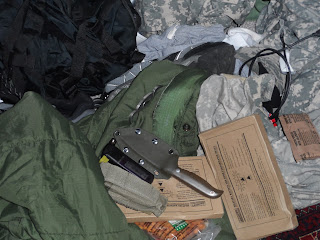 It might have been more instructive to the Staff Sergeant if he hand been subdued.
But that probably would have started up some kind of Official snowball that needn't start rolling.

I hope that the training really does make guys think about what can happen, should they be called out to such a mission. Failing (and realizing it) is a good way to learn. :)

Matt, he would probably have taken at least mild injury in the process. You have to be really experienced to hit the ground hard while being taken down by someone else, without being hurt.