CamelBak is one of my favorite brands, for very good reason.  All the CamelBak products I've bought have proven to be tough, well-designed, and long-lasting.  My review of the CamelBak Better Bottle is up at Seek Cover.

I watched a few episodes of Supernatural in the past, and always enjoyed it.  The most basic premise is that two brothers travel around the country fighting unnatural bad things.  On that level, it's an enjoyable show, if you tolerate some grimness.  I discovered the show was on Netflix a few months ago, and started from the beginning, and that gives a completely different perspective.

Dean (Jensen Ackles) and Sam (Jared Padelecki) have grown up in this lifestyle due to a tragedy in their childhood.  They travel in their black 1967 Chevrolet Impala to mysterious occurrences around the country, usually masquerading as federal law enforcement to find more about the situation.  There are additional plot arcs, but each episode can be enjoyed as its own separate story.

This is by nature a dark and brooding epic, but it's much different than the Twilight "please drink my blood!' romantic nonsense.  Sam and Dean have favored weapons (a SxS 12 gauge and 1911 for Dean, a sawed-off pump and Taurus 92 for Sam), as well as an additional arsenal against the forces of evil.  While not likely to bother adults, I would never let any 10-year-olds watch this show, and probably want watchers to be 14 or older.  This is both because of gore and disturbing ideas and images- again, if you're a reasonably sane adult, you may very well enjoy it, but this isn't a kids' show.

The characters in this show are frequently in desperate circumstances, and often feel they are trapped in a hopeless existence, but this bleakness is offset by frequent lighter-toned episodes that relieve the tension, and that are usually very funny.  The writers freely invent fanciful "facts" (Samuel Colt was a demon hunter who built a revolver that could kill almost anything evil, for instance), but sometimes also write in real history, such as the "Murder Hotel" Herman Webster Mudgett used to kill at least 27 people in the 1890s.


It's rare for television programs to hold my attention for long, and the ones that I do like quite a bit (Lie to Me, Dead Like Me) have a habit of being cancelled early.  It's nice to find an fun and engrossing television serial with entire seasons to enjoy.

I love sauces, especially spicy ones.  I thought today would be a good time to talk about some sauces I've used in the past few months.

Mrs. Renfro's Ghost Pepper Salsa is the first "sauce" on my list.  Mrs. Renfro's is a brand from Fort Worth, Texas, that offers very high quality sauces.  Salsas tend to be used more liberally than other sauces, as they don't tend to be as concentrated.  This salsa, though...it's flavorful, but HOT.  Use with caution, sparingly, like you would a standard very spicy sauce.  If you like the convenience of ordering of Amazon, the link is below, but it's cheaper to just order directly from Mrs. Renfro's.


Mrs. Renfro's Habanero Salsa is not an insanely hot as the bhut jolokia* Ghost Pepper Salsa (Scary hot, kids!), it's just delicious and hot.  If you like a lot of heat, you can use this salsa in moderation.  Again, you can buy directly from Mrs. Renfro's, or click the link below.

Bufalo Chipotle hot sauce isn't really hot.  There is just mild heat, and a delicious smoky flavor.  It's a good general usage sauce for meats and other foods that benefit from adding a smoky tang.  You can buy it here for a couple dollars, but I have found it locally for less than $1.

There are several brands of chili sauce, such as the excellent Huy Fong Sambal Oelek Chili Paste that are readily available at any Asian food mart in the US, as well as in many ordinary grocery stores.  These are usually inexpensive, and add a really nice flavor and mild-to-medium heat to foods, with a little sharpness that  kicks up the flavor of a dish.  I was shopping in Springfield on Valentine's Day before picking up my order from the Springfield Butcher, when I saw what appeared to be a very similar sauce, with similar ingredients.  It was reasonably priced, and every brand I've tried of these pepper sauces primarily made of ground peppers, vinegar, and salt has been similar, so I picked it up.  The Ziyad "Red Hot Pepper Sauce" was horrible!  It was not hot AT ALL, and had almost no flavor except for overpowering salt.  I have mostly remedied this by mixing in almost an entire bottle of my hottest sauce, the deadly Wicked Tickle Bhut Kisser.  Now I have something that has some heat, and a flavor other than salt.  Don't buy this swill, unless you're out of salt, and need to pickle something.

If you're interested in hot peppers, whether just trying new varieties, or want to learn how to grow them, check out the New Mexico State University's Chile Pepper Institute.

*bhut jolokia was the hottest known pepper in the world, but has been surpassed by- I swear I'm not making this up- the Trinidad Scorpion, some variants of which are literally as hot as OC spray.  If you want to get a little bhut jolokia to make your own sauces, here's a link.  This one ounce of bhut jolokia flakes will probably be about the right amount for a GALLON of hot sauce.

I cooked dinner tonight.  Bacon-wrapped venison backstraps, bacon-wrapped scallops, stuffed shrimp, chipotle remoulade, sliced sweet peppers, home-made hummus, and lightly toasted Afghan bread.  (Yeah, I know that much bacon was cheating, but as a very cute former classmate said, If you're not cheating, you're not trying, and if you're not trying, you're only cheating yourself!)  This was accompanied by Fetzer Chardonnay, that was good enough that I had a glass (I don't usually like Chardonnay).  Then I put my Bluetooth headset on and listened to my new 12 Gardens: Live Billy Joel CD while I tidied up in the kitchen.  And the night is young.  :-)   If you're in the area, the Springfield Butcher is a terrific place to pick up fresh meat, including venison.

I hope your day, if not as glorious, has at least been very pleasant.
Happy Valentine's Day.
Posted by J.R.Shirley at 7:11 PM 3 comments:

This is a song that reminds me of some parts of my younger life.  I think it's still relevant to a certain experience, despite being well over the legal age.

Grill Me Some Dinner

I have a confession to make.  I don't see my family nearly enough.

Yes, it's true.  They are- as a close friend would say- far, and I hate Mobile's summer weather, and, and...but I found a really good price on an airline ticket a week after the SHOT Show, and since I wasn't sure what my schedule would be like after my transfer to Civil Affairs went through, I thought I'd better go.

Maryland in January was wintry, but last Monday evening in Mobile, Alabama was an amazing and beautiful 68 degrees.  Little brother and I took advantage of the incredible weather to indulge a favorite pastime of mine: grilling.  While at Lowe's that afternoon, I was looking for charcoal lighter fluid when I found something very interesting.


Now, there are places where grilling might happen that do not in fact have electricity, but since grilling frequently happens on folk's patios, a reusable lighter that imparts no petroleum flavor, will not explode, and that- best part- only cost as much as two cans of charcoal lighter fluid was too good to be true, right?  I decided to take the chance.  After an unexpectedly complicated grill assembly, the charcoal briquettes were poured, and the starter was inserted, and covered with a layer of briquettes. 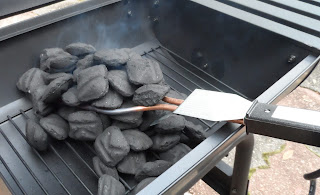 The starter (which I couldn't help calling the Loop of Doom) became hot almost instantly.  I had set my phone timer for seven minutes after reading the starter's instruction to unplug the starter after eight minutes, or life as we know it would end.  (Well, okay, actually, the starter is "only" going to reach over 1,000 degrees and melt, but that seems bad.)

Some of the charcoal was smoldering within just a couple of minutes, and there were flames by seven minutes.

I unplugged the starter at seven minutes, and pulled it out a few seconds later.  The plastic was cool enough to handle with bare skin.  After that was the simple matter of waiting for the charcoal to all achieve the right consistency.

The coals seemed to be ready sooner than most times when I've used lighter fluid.  The process was easy, there was no explosive danger, and no gas taste.  If the starter holds up to repeated use, it's quite a bargain.

The grilled bratwurst and potatoes were delicious. :-)
Posted by J.R.Shirley at 9:29 PM 6 comments: