I posted a picture of one of the first Super Daily Kiris here a couple of months ago.  It was in CPM 3V, which is a terrific knife steel, but not one that is a so-called stainless steel.  3V is a superior large knife steel, where its shock absorption is needed to handle the stress caused by the leverage a longer handle and blade provide.  On a very small knife like the Daily Kiri, 3V is overkill.

The second series of Daily Kiris were rushed to me by Sam about two weeks ago, just in time to take some to SHOT with me.  Most of these were done in 440C, which is one of the best combinations of rust resistance and edge holding for knife steels.  This one is going to one of my favorite people, who many of you know and love.  Happy birthday, Tam.

Note: child abuse is taken EXTREMELY seriously here.  The following essay points out the basic steps that must be considered if some rights are too dangerous, and "Protecting our kids is our number one obligation."

Essentially all child pornography today is transmitted via the internet. All attempts at enforcement to date have been "war on drugs" level ineffective. The same modern convenience that allows you to stream family-friendly sitcoms into your home for you and your children to watch also allows criminals who rape and torture young children to share their idea of entertainment with their fellow enthusiasts.

Since the mid 1990s, and including college students in the count, somewhere between 200-300 students have been killed or wounded by gunfire on campus (and that includes gang related shootings and single victim shootings as well as spree killers). Going by the statistics published by the Department of Health and Human Services 2010 report on child maltreatment, in that one year that agency had 40,141 supported reports of sexual abuse of children forwarded from state agencies (in 2010, specifically, one child was shot and killed in the grounds of an American school). At the same time government estimates are that there are one million child pornographic images online with 200 new images entering that corpus every day, and that they are partly there for the US market consisting of as estimated 16-33,000 active consumers here in this country.

As noted above, an estimated 40% of those thousands are active sexual predators targeting children. So next time your anti-gun interlocutor is suggesting law abiding citizens have their 2nd Amendment Rights infringed to guard against actions of criminals and the lunatic fringe, why not just point out to them that every time they look up a new recipe for lemon squares or make a trade on their fantasy football team they are using a technology that is every day being used to sexually exploit and victimize children and that the market for that product literally drives human trafficking and children being abducted and used as sex slaves to feed the criminal market for internet kiddie porn. In addition, the child raping subculture uses the internet to communicate which can include exchanging advice on how to avoid capture, advice on victim selection, and even cases of arranging to share victims.

This is, of course, in addition to any and all other crimes that can and do take place using the internet. Suggest to them that perhaps reasonable and law abiding citizens might consequently support a move to register computers and other means of internet access with the government. Maybe even pay a tax stamp, the proceeds of which would help with prosecution of child pornography and other internet crime. Perhaps they would also support some reasonable connection speed restrictions -- what do you need all that bandwidth for to email your mom and buy movie tickets online? Maybe you'll never do anything wrong with all that bandwidth, but you know who else needs bandwidth? Child pornographers and pedophiles. Should your convenience be more important than protecting children from sexual predators?

While we're on the thought, why do you need multiple means of internet access? An internet connection on your phone, an iPad or other tablet, multiple laptops or desktops in the house for you, the spouse, and the kids? To borrow from Bill Ruger, no law abiding man needs more than one way to get online. At the very least all those internet connections and typically poor security associated with them allows child pornography distributors to surreptitiously use law abiding citizens' computers to be hijacked by child pornographers and used to distribute their criminal material (which has happened).

Apply the same logic to memory storage devices. Oh -- you have a legitimate need for a one terabyte external hard drive? Really? You know who else needs extravagantly over sized external hard drives? Child pornography consumers and distributors use them to stockpile their images of children being raped so they can better hide them from police. Given that it is almost a universal aspect of child pornography arrests that portable digital memory devices will be found, sometimes quite well hidden, containing child pornography images, perhaps we should consider registration of these devices as well. Or maybe, again, some size limits -- cue the ghost of Bill Ruger again: No law abiding man needs more than 250 megabytes of portable memory storage.

Is this all silly and over the top and ridiculous? Well, in 2012 there were about 6 spree killers. Going by the DOJ's estimates in 2012 there were something like 6500-13000 child porn fueled predators out there in the US actively engaged in stalking, grooming, and raping children. Or put another way, American children are 1000-2000 times more likely to encounter a predator intent on subjecting them to horrific and life altering/destroying crimes (or murder) where the internet was the common modern technology involved than they are to encounter a predator equally intent on committing horribly life altering/destroying crimes or death where the common modern technology involved is a gun.

But the reality is I bet you can't find one gun registration fan, one gun confiscation fan, who is willing to even curtail, much less surrender, their internet access and the leisure time activities it fuels even if it means we could better identify and prosecute child pornographers and the consumers of their product who then go on to rape and molest children.

Therein, I think, is some sort of working definition of hypocrisy.
Posted by J.R.Shirley at 1:17 PM 3 comments:

Rumors of My Demise...

have been exaggerated. I've been in Vegas looking at new products at SHOT. However, my lunch at Otto yesterday gave me food poisoning, so for a few hours, I wished I was dead.
Posted by J.R.Shirley at 11:01 AM 8 comments:

A friend in Colorado told me she was sending me some coffee beans she'd roasted, and I realized I had no grinder.  Coffee grinders can range from the simplest Mr. Coffee- barely more complicated than an electric pencil sharpener- to electronic gizmos that cost hundreds of dollars.  I wanted my coffee, but I wasn't willing to put an enormous investment into it, so I figured the simplest Mr. Coffee was the way I was going to go.
At Target, the Mr. Coffee I had in mind was about $16, but for another $6, there was what appeared to be a much better machine.  I figured $22 wasn't too big an investment, and picked it up.


The Mr. Coffee in question is selectable for amount (4-12 cups) and fine, medium, or course grind.  The grinder separates into three components, base, bowl, and top. 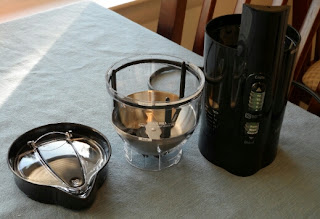 Those three black vertical pieces are called the Chamber Maid, and are used to loosen any grinds left in the bowl after you've spooned or poured out the ground coffee.

I measured out three tablespoons of beans, set the grind to medium and pressed start.  After about 10 seconds, the grinding stopped.

The ground coffee looked pretty good, and smelled incredible.  About 2 1/2 tablespoons fit into my Bialetti without packing.
After about four minutes, my espresso was brewed, and I mixed it with warm milk.


I noticed that there did seem to be a few over-fine grounds in the cofee, but with a machine this simple and inexpensive, I think I did pretty well.

Professor Seamus Curran of the University of Houston believes that the world, and in particular the United States, will see increasing use of solar energy, especially to power locations not directly on "the grid".  He especially envisions thin solar film that can be applied to many exterior surfaces.

I also think solar power use will expand.  The efficiency of solar electricity generation has made incredible advances since the first solar cell's initial 4% efficiency (later improved to 11%, which just begins to demonstrate the point).  Vanguard 1, launched in 1958, used solar cells to power its radio. Those early solar cells lasted about 7 years, while conventional batteries on board lasted less than 3 weeks.
In the 1970s, solar power began to be used for warning signals on oil and gas rigs, lighthouses, and railroad crossings in remote locations.  In 1981, the Solar Challenger, a solar-powered  aircraft that, at 336 lbs, was a little too heavy to fit the US "Ultralight" Classification of 253 lbs, flew across the English Channel.  In December 1982 to January 1983, the Quiet Achiever used solar power to drive all the way across Australia.  In 1998, Subhendu Guha led a team to create the "Solar Shingle", an integrated strip that looks much like traditional roofing materials, and only requires a small hole every 7 feet so the wires from the shingle can be fed into the building.  In the best capitalist traditions of the US, Guha's United Solar Systems developed a better solution- for profit.


This Department of Energy timeline provides a good bit of interesting detail, if you enjoy the topic.

I recently tested  2 solar-charged LED lanterns from d.light.  One of them proved to be defective, but the other was inexpensive (less than $15), provides excellent light output, and seems quite sturdy.  d.light has already responded, in well under a week, to my request for a replacement unit for the defective one, and sent  a video describing improved products, with an even better warranty, that should be rolled out within 2 months.  Stay tuned.