The Truth About Love

No, not over-sharing.  This is the title of Pink's album, which came out in September 2012, shortly before I left Afghanistan. I bought it instantly via download from Amazon. 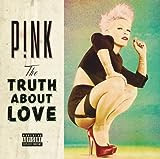 Pink's last album, Funhouse, was a masterpiece, full of wit and rock, innovative and thorough in exploring themes ranging from rejection by your significant other ("So What" and "I Don't Believe You") to hardcore party-girl wondering how to cope with life without social lubricants ("Sober") to dealing with high-emotion relationships ("Please Don't Leave Me") and wondering at the confusion and crisis of modern life ("Ave Maria").  Even her slow Aerosmith-flavored "Mean" with Steven Tyler backing her up- my least favorite song on the album- isn't bad.  I would call Funhouse a very solid and enjoyable 4/5 stars.

Compare the writing to that of Funhouse's title track:

The Truth About Love's songs range from okay ("Here Comes the Weekend", "Beam Me Up") to mediocre (""Walk of Shame") to the outright annoying, nails-on-chalkboard "songs" like "Slut Like You" and "Are We All We Are".

If I had to do it again, instead of buying the entire album, I would just download the bluesy, gospel-influenced "The Great Escape", and put it on repeat.  Unless you are an absolute incredible fan of Pink, I would skip the rest.  If you haven't listened to any Pink, I strongly suggest Funhouse, which is what Pink should sound like. 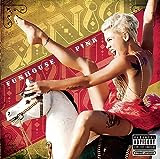 I really like "Try" and "Just Give Me a Reason," (I hope those are from the right album. . .) Anyway, I realize that's in large part because they both happened to deal with some troubles in my real life at a time when I was trying to understand, and maybe if you don't have that added impetus, they're not so striking.

P!nk continues to be my guilty pleasure that makes people look at me funny.

Both "Try" and "Just Give Me a Reason" are from The Truth About Love,. They're definitely not the "nails on chalkboard" songs on the album. If you haven't listened to Funhouse, I think you'll like it. :-)

...I will say I would like "Just Give Me a Reason" a lot more if someone else sang the part voiced by Ruess. Except for his voice, it would probably be my favorite song on the album.