I have not been much of a fan of the V-22 Osprey.  You can read more about why here.  At first, I did not want to ride the tilt-rotor craft, wanting instead to ride the powerful, sturdy CH-53.  After giving it some thought, I realized that, despite the design being an invitation for Murphy to meddle, the Ospreys in RC South didn't seem to be dropping out of the skies with any regularity.


Whether I chose to deliberately ride the V-22 or not, if I want to travel "rotary", which is the only way to get to certain FOBs, the V-22 might be what's available, especially in this Regional Command, controlled as it is by Marines.  I thought a walk-through of the process might be interesting for all my readers inconvenienced by being comfortably home in the US, instead of traipsing around the CJOA*.


Unless a reservation has been entered for you several days previously, you're flying Space A.  There are challenges to moving around Afghanistan, including, frequently, no flights headed to where you want to go, fully booked flights, delays due to weather and mechanical failure, and acts of Shaitan.  Finding an available flight might make the military traveler happy enough to ask for the corporal at the rotary desk to add a smiley face to the high-tech "ticket" issued.

Service members learn being in the military involves lots of waiting followed by a few minutes of things that MUST be done immediately, usually followed by more waiting.  Waiting for a flight is almost always like this. 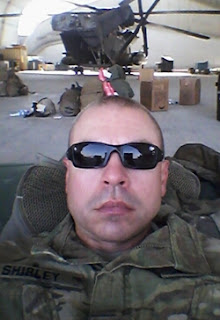 A book or Kindle application on your phone or tablet helps to pass the time if you want to do something besides nap or watch flights.

The V-22 ride is...interesting.  You rise mostly vertically, and then shoot forward and up very quickly. 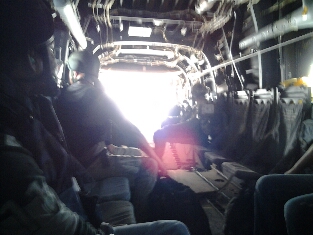 The light coming in from the open tail end of the Osprey really does look like that, blindingly bright.  Most of the flight that harsh light is all that can really be seen of the world outside.


Passengers are the typical mix of Marines and Soldiers, with the occasional contractor or DA civilian.  The ride is less jarring than most helicopters, but still more like riding in a blender than almost any true airplane. 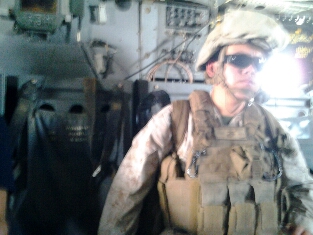 You might land at a FOB or two, and the gunner provides security behind his woefully inadequate M240 7.62mm MG. 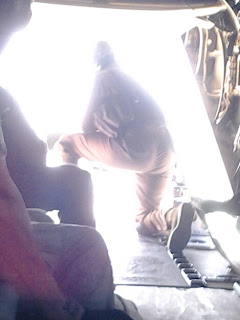 If the fates are kind, you arrive at your destination without serious incident, grab your 150 lbs of gear, and deplane. 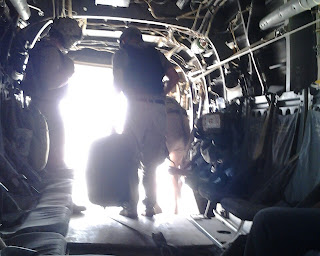 I hope you're enjoyed this brief taste of riding a V-22 in theater, and thanks for flying Marine Air.


*Code for this hellhole of a country, Afghanistan.
Posted by J.R.Shirley at 1:37 PM 8 comments: