The weather has warmed dramatically in the last two months.  The days are hot, but the nights are often pleasant.  Between the warmer weather, and sharing with lots of new friends, I've actually gone through quite a few cigars lately.  Enough that I ordered some yesterday.

JRCigar has what they (probably honestly) claim is the largest selection of cigars in the world.  Many of them are very reasonably priced, and even nicer, they automatically deduct 10% off the price of a cigar order if it's being shipped to an APO or FPO.  I like to recognize the good guys, when I can, so I'm going to describe three cigars, ranging from really cheap to not-too-expensive, with links to those cigars at JR.

If you're looking for some good but inexpensive cigars, Maria Mancinis are a good bet.  The Magic Mountain can be had for as little as $2.40 a cigar, for an attractive, quality 6"x54 ring cigar. If you want to gift some, I have used the 8-count sampler for birthdays and special occasions for a few friends.  It's a whopping $.10 more a stick, but the cedar box makes a nice presentation.

Moving up to an incredible cigar (my favorite, actually, though I don't smoke them often), the Romeo y Julietta Churchill is still only $3.50 a stick in the 4-pack.  This is a large, well-constructed cigar, and it's good for a nice long chat on the patio with friends on a weekend or holiday.  It's possible to pay more for a cigar, but I really don't think cigars get much better.

On the other end of the spectrum, if you just want a cheap but pretty decent cigar for everyday smoking (or for friends who won't be able to tell the difference between good and excellent), a bundle of nicely sized Consuegras from the Dominical Republic can be had for about $1.30 a stick.  When you consider that this cigar is probably good for a minimum of 45 minutes, that's quite a bargain.

Temperature control is sometimes difficult in Afghanistan.  An air conditioning setting that may just barely keep a tent below swelteringly hot during the day may drop the tent to chillingly cool at night.  While I was staying in the huge transient tents here on Camp Marmal, I saw a few soldiers who obviously had not prepared for cold nights, and loaned them blankets.

I don't profess to be a stellar guy or anything, but I hate to see people uncomfortable, if I can reasonably help them.  If someone loaned me a blanket or sheet, I would fold it and return it with thanks, when done.  I had one soldier that not only didn't thank me, he didn't even bother to return the blanket!  He just left it crumpled on the bed when he left.  I am sorry to be associated even professionally with such people.

I now stay in a smaller tent.  About two weeks ago, there were a couple civilians who spent two or three nights there.  I walked into the tent as they were bedding down, and having just gotten some blankets back from the laundry, offered them.

I wasn't around when these guys left, but not only were the blankets neatly folded, they left a nice note, offering their help if I'm ever in Bagram and need it.  I'd like to do things just because they're the right thing to do, but just a simple, heartfelt thanks certainly goes a long way in being happy to help. 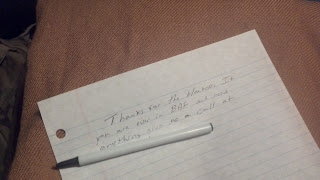 The Beastie Boys were misunderstood.  They played a part, and got stuck playing it for years, even though it was just a stage personna.  But it sold.

Most of us never saw the thoughtful, intelligent people behind the loud, rude boys on stage.  But they were there.  After they'd been around a while, they began to feel free to come out a little bit and be themselves.  Here's an interview with Adam Yauch from January, 1995.

Adam Yauch died yesterday, after a several-year battle with cancer.

Here are their greatest hits


This second link is the type of music many people wouldn't associate with the Beastie Boys.  If you only heard the swaggering white party boys, you should listen to this before you judge their ultimate ability- or influence.