I like an occasional cigar, and brought a few with me from the US.  I didn't smoke any for quite a while, because I was busy during the day, and it was too cold at night.  Lately, however, the nights have been about perfect.

I returned about two weeks ago from a much-needed R&R visit to Ireland.  When I finally made it out to DDII with COL W and a DLA visitor, I found I had 3 huge boxes waiting on me.  Two were from a friend in Pennsylvania, with nice mugs and monogrammed t-shirts for the guys, as well as water bottles, stress balls, and great snacks.  The third box was a travel humidor the size of a small suitcase!

The suitcase was packed to the gills with Trader Joe's excellent dried fruits, nuts, and snacks, as well as many terrific cigars, a very nice cigar cutter, cigar accessories like travel packs to keep cigars hydrated, and a really neat Swiss Army Knife with a built-in cigar cutter.  It was an amazing collection.  And a little humbling.

I started trying to "spread the love" before I left that day, giving some cigars to two majors I know on DDII who smoke them, and also giving cigars to a sergeant and civilian who I chatted with as I waited on the chopper pad for pick up. I've also encouraged some DA (Department of the Army) civilians who are there supporting us to come by the DS "hooch" to share some good cigars with us.

Something about the camera that took this picture makes everyone look fat- my sailor closest to the camera weighs at least 40 pounds less than he appears in the picture!  It should be obvious, though, that we're pretty darn happy.  Thanks. 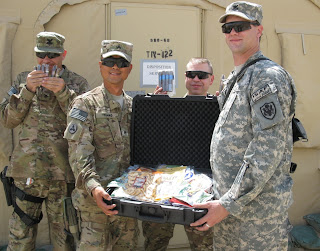 The best part of being in Ireland won't have been the food.

But it certainly didn't hurt.

I'm now a little over halfway through my R&R, and amongst traveling and walking and drinking and visiting and touring, I have just finished The Last Colony

. The Last Colony is the last of a tri-parter from John Scalzi. Old Man's War

is the first of the series, which continues with The Ghost Brigades

. Old Man's War in particular has a pleasantly Heinleinish feel to it. Both the first two are excellent, very enjoyable reads. The last feels slightly different, but does not suffer for it.

The Last Colony, especially early in the story, is much funnier than the first two books. This may be because Scalzi has already proven that he can write a good read and sell it; he now has nothing to prove, and maybe he's relaxed. In any case, this book can stand alone, or (my suggestion) can be read after Old Man's War and The Ghost Brigades. If you enjoy military sci-fi, it really doesn't get much better than this, unless you're one of the oddballs that revels in the minutia of space opera. Interesting, full-bodied characters, wit, good but not pretentious dialog, thoughtful plots- it really doesn't get much better. 5/5 stars.

This is the morning of my 3rd day here. Yesterday we visited the Viking museum and Christ Church. After a terrific lunch of beef and stout pie, we headed off to find live Irish music. A poetry reading was happening at the Palace Bar instead, so we just had a pint, and headed back out. Today is gray, so a bus tour may be in order.