Should old aquaintance be forgot?

This has been quite a year, and after my painful 2010, I am very thankful for the very many good things I encountered in 2011. I hope this year will be one in which you continually find the good in life, reach out in love to those around you, and find yourself more at peace.

For all my suggestions to others to carry two lights, wouldn't you know it- I got in a hurry to make sure I caught my flight out to visit a sister DRMO site, at the last minute and went off without my ElZetta. As I drove with Chief A to the fixed wing terminal, he suggested that I take the opportunity while I was at the larger base to go out to a FOB, instead of waiting until I returned to LNK. Great idea!

A day and a half later, I found myself outside at a decent-sized FOB that, in most areas, was pitch-black at night. Fortunately, I did take some of my own advice! I have tried a variety of small keychain lights, and after years of experience and trial and error, I strongly suggest the Photon 2. The Photon 2 puts out a very useful light that lasts for an extremely long time, and it is tough (for comparison, I have broken three of the marginally less expensive Inova microlights, but never broken a Photon). Further, the price relative to inflation has actually gone down over the years.

I had a Photon 2 as I flew into Kuwait, on the way to Afghanistan. I noticed a specialist with a 25th Infantry patch, and after talking to him, found that he was in the same battalion I had been in when I was at Fort Lewis. Before I flew out, I gave the specialist the Photon 2 I had on my keychain. Fortunately, when I asked for Christmas gifts for my team, one generous soul (bless you), sent extra- including red Photons. Since my team was covered, I felt comfortable taking one for myself, as well.

I have never been as thankful for that little red light as out on that dark FOB. The light was bright enough to keep me from running into several objects that I would not have seen otherwise, without so much light that it would have been an issue on the almost completely blacked-out base. But remember, kids- two lights are better, even if you think you don't or won't need them.
Posted by J.R.Shirley at 10:38 AM No comments:

The Most Wonderful Time of the Year

Christmas has always been my favorite day of the year. Sure, I like getting things, but even more, the joy and excitement of being able to give things to others has often led to me planning for Christmas for months in advance.

This year, I was focused on getting ready for deployment. Only after I was here, did I think about the small team at Camp Leatherneck, and how they could surely use some reminders of how they were loved. So I asked for help. And you delivered.

I was amazed, astonished, humbled, and brought to tears several times by the response. My team has all kinds of OTC meds, 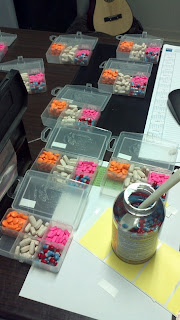 shelf-stable snacks, toiletries, books, movies, lights, knives, warm socks, personalized stockings, and cards. Thank you so much. You made today special for this little group of sailors and soldiers, so far from home. You made it very special for me, too. 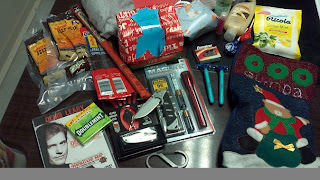 One of the boxes I received a few days ago contained CDs and DVDs from Little Bro and my favorite SIL. They were mostly to include in gifts bags for my team (gift bags were helpfully included), but there were also a few DVDs and CDs that Philip explained had been sent especially for me.


I had seen an episode or two of Justified when it first came out in 2010, but my schedule didn't allow me to follow it as I'd wanted. When I actually started at the beginning, I quickly changed my opinion of the show from "pretty entertaining" to really good.

Timothy Olyphant starred in 2007's Hitman . I rarely expect much from movies based on video games, but Hitman was surprisingly entertaining. (Yes, I was a bit intoxicated, the first time I watched it, but I've watched it since. And I still enjoyed it.) He also played the villain in Life Free or Die Hard, the same year. In Justified, Olyphant plays a US Marshal forced back to his native Kentucky after a very public gunfight in Florida.

Olyphant is a good actor, and sometimes reminds me of Billy Bob Thornton in an "aw, shucks!" role. (If BBT ever played any characters that would warn you 24 hours in advance to get out of town or die, that is.) The gun handling is pretty good, the story lines are reasonably fresh, and the hero's nemesis is brilliantly played by Walton Goggins. There is some vulgarity, and of course violence. If you can handle those, I think you'll enjoy the show- I know I'm already most of the way through the first 9 episodes, and dreading reaching the end of number 9.
Posted by J.R.Shirley at 11:04 AM 4 comments:

I received a work cell phone yesterday, and charged it. Today, I added minutes from a calling card, and left the phone on. Just 15 minutes later, I got my first call! It was a wrong number, of course.

I received more boxes full of incredible stuff for my team yesterday and today. I am delighted that so many of you have obviously worked hard so people you will probably never see will have some things to bring a smile to their faces Christmas morning. (As well as some things we usually take for granted, like vitamins and aspirin.)

I am understating a great deal, here. I am seriously awed at the generosity shown, and very thankful. I hope everyone reading this is having a great December.
Posted by J.R.Shirley at 10:22 AM 2 comments:

When the Gifts Came Rolling In

The grumpy former Marine in the office wanted to know today who had packed all the boxes for Lieutenant Shirley?! When I walked out, I found a whole stack. My scheme to bring Christmas for my crew has already done as well as I'd hoped, and I know there are at least a few more boxes inbound, too. Besides the gift bags assembled, we have books and toiletries and snacks, oh my. And sheet sets for the members of my team who arrive in late December.

My thanks to every one of you who has supported my team, or any soldier, sailor, Marine, or airman.

Absolutely not at all connected to your support, there's a bit more history (with links to abundant black and white photos) up at Seek Cover.
Posted by J.R.Shirley at 7:17 AM 1 comment:

I had the opportunity to ride in a M-ATV this week. I really liked the vehicle, and was able to see some improvements that should make them even more survivable. I have an article describing the whole HMMVW to MRAP process at Seek Cover.
Posted by J.R.Shirley at 2:17 PM 2 comments:

To answer your question...

I've received quite a few queries in just the week that I've been here, asking what my people and I can use. Camp Leatherneck does have a USO, and it's well stocked with many essential items.

What we don't got:

Sugar-free cough drops (Not sold in the MCX, either)
Aspirin (These three are in the MCX, but only in single serving packets)
Tylenol (generic is fine)
Benadryl (generic is fine)
We do get in jerky sometimes, but it's rare, and appreciated. As always, feel free to send John Ringo, Larry Correia, and David Weber books. ;-)
Posted by J.R.Shirley at 11:44 AM No comments:

Gentle readers, I need your help. I am assuming command of my own little detachment. I would like to make Christmas special for the 9 sailors and soldiers under my command. I plan to pull them in, so they can get a few days off to relax, recharge their batteries, and talk to family and friends around Christmas.

I could really use some help with some small gifts to brighten their holidays in this ugly place, so far from their homes.