I have twice in the last month had the pleasure of joining my friend Sam in Pennsylvania for shooting and socializing. 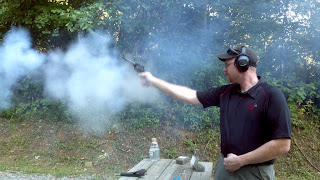 The first time, our buddy Ken was able to shoot with us as well, though sickness interfered the second time. 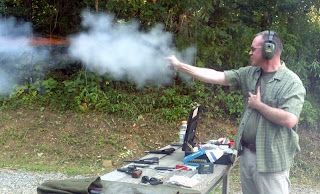 I hadn't had the chance to meet Sam and Ken in person previously, though I've corresponded with Ken online for three years or more, and with Sam, for at least two. Both were skilled shooters, and kind teachers to my less experienced trip companions. It was a great experience, though there were a few..."issues".

Pros: everyone had a great time, we got to shoot some new firearms, we got to finally really put some faces to people that had previously only been voices and words on a screen, and a safe time was had by all.

Cons: my Rossi 7.62x39mm not only won't fire Russian ammunition, it won't reliably fire Winchester ammunition, nor the handloads Sam had. My Remington 7600 .35 Whelen was discovered to have some rust in the chamber (but some CLP and a good scrubbing remedied that- Sam then put two rounds into touching holes at 50 meters using a Williams aperture sight). Easily the most distressing of all was my beautiful Territorial Gunsmiths custom .35 Whelen, which was previously unfired. Despite trying...it's still unfired. Here's hoping it's a simple fix, since the TG .35 is one of my two most expensive rifles.
Posted by J.R.Shirley at 2:23 PM 1 comment:

Popular Science reports on a bracelet that will give blind people warning of objects from one inch to ten feet away. Proximity is expressed by increasing pressure, and direction conveyed by varying the side the pressure is felt on the gauntlet. I might ordinarily be offended that the inventor is not attempting to make a profit- he'll give the plans away, and materials can be purchased for under $100-but considering the target audience, I guess he gets a pass.
Posted by J.R.Shirley at 8:45 AM 3 comments:

There are a couple additions to my blogroll. Of especial interest to me as a history student and teacher, and firearms enthusiast is Forgotten Weapons. Check them out.
Posted by J.R.Shirley at 6:29 AM No comments: