Yesterday I discovered that my driver's window had been smashed. That would have elicited more of a reaction from me, except I was talking to Cousin Pam...who was telling me about the passing of my Uncle Kenny. Uncle Kenny tended to be quiet and sometimes a bit stern, and he was very dignified.  I remember spending a few nights over at my cousin's, so young that I was afraid to come back from the bathroom in the middle of the night, frightened of the dark doorways around me.  Over the years, I remember reading Pam's Star War comics, of watching The A-Team's exploits and playing Atari with her,  but I never remember Uncle Kenny giving me a single harsh word.

Maurice McKinley "Kenny" Chastain died at home Friday, April 22, 2011 at the age of 81. Kenny was born in Mt. Vernon, AL to Wren and Pearl Chastain. A resident of Mobile, he was a member of Luke 4:18 Fellowship Church. He was a Korean War Navy Veteran and a retired Air Traffic Controller who enjoyed fishing, woodworking, and being with his family. He was Past Master of Chickasaw Lodge #894 and a dual member of Spring Hill Lodge #896, and served as District Lecturer of the Alabama Grand Lodge, F&AM. It was his great honor to conduct hundreds of Masonic funeral services. Kenny was a 33rd Degree Scottish Rite Mason, a KYCH York Rite member, and a Shriner. He was Past Grand Governor of Alabama of theYork Rite College and Past Patron of John B. Shearer Chapter #517, OES. He served as Grand Master of the Alabama Grand Lodge, Independent Order of Odd Fellows, and was Past Sovereign Grand Chaplain of the Sovereign Grand Lodge, IOOF.
He is survived by his loving wife of 36 years, Carrol Shirley; daughters Diane (Ken) Eelkema, Sandra Chastain, and Pamela Upchurch; sister Jane (Charles) Gullatt; grandson Dennis (Lisa) Eelkema; great granddaughters Lauren and Maggie; and many other relatives and friends.
Visitation will be held on Tuesday, April 26, 2011 from 10:00am to 12:00pm at Mobile Memorial Gardens, with the funeral services at 12:00 in the chapel. Internment will be at Valhalla Cemetery. Honorary Pallbearers: Percy D. Lane, Randall Fletcher, Curtis Hass, and Dulane Dunnam.
Memorials may be sent to: Luke 4:18 Fellowship Building Fund, P.O. Box 850695, Mobile, AL 36685. 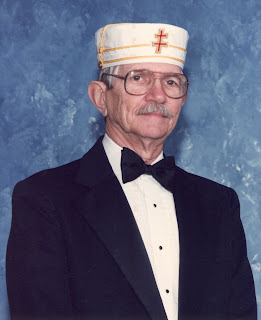 John, please accept our condolences on the loss of you obviously dear Uncle Kenny.
Don't hesitate to call/write/text if there's anything we can do.

My sincere condolences, brother. There is always so much more than the obits can ever include. From the positions he held, I'm positive he influenced many, many lives for the better, and whom among us can ask for any better legacy than that?

Deepest sympathies, John.
May the right Worshipful Brother Chastain rest in peace after his long and worthy labors. I regret never having met him.

My condolences my friend. Know that RWB Chastain has gone to a better place.