No.
Even an appearance by Justin Long, wearing a mustache, couldn't save this one. 1/5 stars.
Posted by J.R.Shirley at 4:16 AM 1 comment:

I Heard About the Morgans

I just finished watching the surprisingly enjoyable Did You Hear about the Morgans?  I should confess that I've enjoyed Hugh Grant in everything I've seen him in, so far.  Music and Lyrics


Hugh Grant and Sarah Jessica Parker, who I usually find annoying, star in this comedy about an estranged couple who witness a murder.  They end up finding shelter with a couple played by the incomparable Sam Elliott and capable Mary Steenburgen.  The chemistry between the couple is excellent, every actor plays his part beautifully, and there are a few enjoyable jokes about the gun culture and Democrats.  With an extra half a star for the first movie use I've seen of a Kel-Tec carbine, it gets 3.5/5 stars.
Posted by J.R.Shirley at 11:11 PM 3 comments:

Salt and The Other Guys

Salt is the Angelina Jolie spy thriller. It succeeds in having lots of action, and is well-acted. The unfortunate part is that Salt has a ridiculously overcomplicated plot that is, somehow, still predictable. After adding back in half a star for the most innovative use of a Taser in a movie, it nets 3/5 stars. Don't expect a lot except gunfire and big lips, and you should be happy. 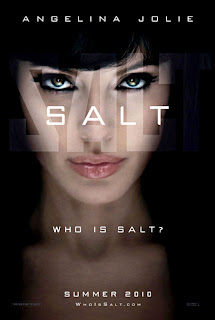 The Other Guys pits Will Ferrell against and with Mark Wahlberg. Will Ferrell seems to only know how to play humor one way, over the top (with perhaps the single exception of the touching Stranger Than Fiction

). This works in some movies (Old School

, Anchorman - The Legend of Ron Burgundy

) but falls down in others (Semi-Pro, Stepbrothers). Dwayne Johnson and Samuel L. Jackson make brief but even more outrageous appearances (but at least you're not in a Disney flick this time, right, Dwayne?).  If you can handle your humor silly and applied heavily, you'll enjoy this movie. 3.5/5 stars.
Posted by J.R.Shirley at 4:38 AM No comments:

The environmental and economic problems the USA has been experiencing in the Gulf of Mexico continued today with another oil rig explosion. The Mariner Energy rig off the coast of Louisiana is about 200 miles west of the British Petroleum rig that caused massive leakage this year. The 13 rig crew members donned "gumby" suits and huddled together in the water until rescued by the Coast Guard.