Eight people died because of their own stupidity on Saturday, August 14, 2010. The eight were among a group crowded close to watch off-road trucks in Mojave Desert Racing's California 200, when driver Brett Sloppy rolled his Ford Ranger after a jump. 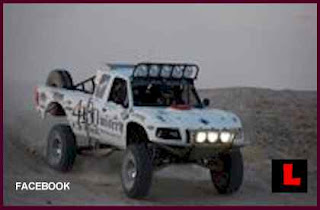 The section where too-few stupid people were forcibly ejected from the gene pool is popular because the off-road vehicles are airborne. Fans stood as close as four feet from the racing vehicles, despite no guardrail or other protection. The only real apparent tragedy is the injury of a child who was one of the 12 injured survivors.

Hey, stupidity should hurt, folks. I'm sorry a child was injured, but much like the joke about 10,000 lawyers at the bottom of the sea...What do you call the death of 8 people who were stupid enough to stand just feet away from A RACE TRACK without any protective barrier? A good start.
Posted by J.R.Shirley at 12:13 PM

Been happening for decades. Check out how close the crowd gets at European Rally races. A few spectators catch a Subaru in their teeth every now and then, yet you don't hear about their Gooberments going all Nanny State on the Sport. Of course, if a few more idjits would put down their EyePhones and actually help by learning some First Aid (there an App for keeping pressure on a open artery?) instead of YouBooking and Facetubing, maybe they wouldn't have as many causalities. 'Course, this just could be a case of "Evolution in Action", also.

God bless Subarus. I plan on having one eventually, if I don't go for a Lancer Evolution.

Or I might grow up first. But I doubt it.