I walked towards the door and picked up my running shoes. Tempy padded over and looked expectantly up at me. "No, baby, you're not going with me," I told her. She kept looking up at me.
"Well, okay," I relented, and slipped the leashes on the dogs before I made my way outside to the patio for a Monday morning sit in the pleasantly cool weather visiting the DC area. Since I hit the big time (joking), I actually have my own cigar credit card from JRCigars. Probably the biggest reason I applied for the card was the sampler of high-quality cigars I would get with my first card order. (The fine print said "First order OVER $100, but I still got the sampler!) I decided to break into that batch today with a Romeo Y Julieta Maduro that had been sitting in my humidor for almost two months. 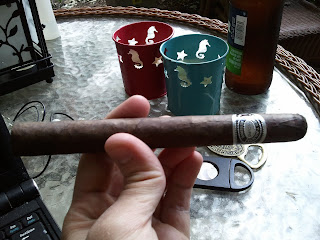 As I sat on the patio, I believed there was almost no risk of me suffering violent attack. Since "very little" is not the same as NO, I had a little alloy Smith and Wesson .38 on my belt. If I felt the risk was higher, I would have worn at least one of my automatics, and if I thought the risk was high, I wouldn't have sat there. I took a Long Hammer IPA with me.
India Pale Ales tend to be too bitter for me, but Long Hammer is one of the few I enjoy. It's still "grapefruity" while not being overpowering. It's powerful enough to stand up to most cigars, while also leaving a clean feeling to offset the heavy taste of a cigar. I often use a good stout, Scotch and water, or whiskey and water, but a Long Hammer works really well.

Romeo Y Julieta cigars are a favorite higher-quality cigar. Since Cuba went communist in 1960, Cuban cigars command a premium, since they are illegal to sell in the United States. The brand, as with several other cigar brands, has spit into Central American-based and Cuban companies. The RyJ Reserve Maduros are made in the Dominican Republic. Non-cuban Romeo Y Julieta are not the most expensive cigars that can be found, but they have a good reputation.

My Romeo Y Julieta Reserve Maduro's wrapper was a bit on the veiny side, but looked well contructed. Since I didn't order it, I'm not sure the exact dimensions- not thinking to measure it before smoking- but I think I may have smoked a 7x48. I clipped the end and lit.

The taste was fairly strong, but not overly bitter or harsh. Espresso is probably the best flavor description, toasty, but not burnt. The draw was not too tight, nor too loose. A good quantity of smoke was produced. The burn time was almost exactly an hour, and the flavor stayed very consistent throughout the smoke. I tend to leave a lot of a cigar unsmoked, but I smoked this one down to just over an inch. The burn stayed fairly consistent, but was not perfectly even.

The Romeo Y Julieta Reserve Maduro I smoked was a solid 4/5 cigar (actually, a bit better than 4/5). When you're talking about cigars that can be afforded by most of us, the Romeo Y Julieta is a good bet. I may have a new favorite cigar.
Posted by J.R.Shirley at 10:56 AM

Good review- I had one a couple of months ago and I agree!