Exploding Across Your Screen

Last year, little brother mentioned an upcoming movie with most of the major action stars.  There are a few actors out there who can shine even in horrible movies shot for a $50 budget (witness Drew Barrymore- of all people!- in Guncrazy

), but some actors are capable of very good work, but rarely are given good scripts and direction.  Dolf Lundgren is a prime example. Lundgren starred in 1989's The Punisher

, but despite Lundgren's martial arts ability and believable onscreen toughness, the script was so bad, The Punisher was shown in one theater, then sent straight to video. He had enjoyable roles in Showdown in Little Tokyo and I Come in Peace, lower-budget but very fun flicks in 1990 and 91.   Universal Soldier

with Van Damme was in 1992, and Lundgren played his part beautifully, but the script tried too hard towards the end.  These days, Lundgren has fallen into the Steven Seagal/Cuba Gooding, Jr. routine of starring in cheap action thrillers, though, like Wesley Snipes, Lundgren can still put in a solid performance- and would beat Seagal's posing, spouse-abusing flabby ass into hamburger without breaking a decent sweat. One of Lundgren's selling points was his extremely fit, ripped body, though it was a capable, realistic martial artist form instead of Schwarzenegger's swollen bodybuilder physique.

A more recent, and probably more gifted actor is Jason Statham.  Another very capable martial artist, Statham was impeccable in one of my favorite movies, 2000's Snatch

.  He's starred in action fantasies such as The Transporter

, both enjoyable fluff, and been in other roles not demanding martial artistry, such as the well-done The Italian Job

and the true story The Bank Job

.  True, Statham broke my heart when he voluntarily participated in the Uwe Boll "movie", In the Name of the King, but I forgive you, Jason.  (I wouldn't even watch In the Name for Kristanna Loken, who has now been in TWO of Boll's abominations.  Kristanna, you are dead to me.) 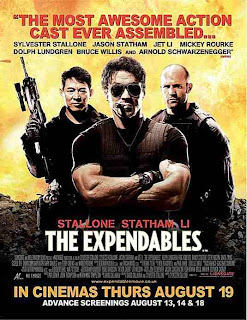 When Philip mentioned a movie that would have Bruce Willis, Sylvester Stallone, Arnold Schwarzenegger, Jet Li, Jason Statham, and others, I admit, I was wildly excited.  (The "others" turn out to be Mickey Rourke, Eric Roberts, Randy Couture, Steve Austin, David Zayas, Gary Daniels, and Terry Crews!) Claire, on the other hand, commented, "Smells like desperation."  Could a movie packed with stars deliver?  The Expendables opened a week ago, and I found myself awake early this morning.  When I work following a day off, I like to get up early, and then go back to bed for a nap in the afternoon before going in to work.  I lucked out, finding my closest theater had a 9:15 showing, which I enjoyed all...by...myself.  (After having my ID carefully scrutinized at AMC.  I guess the ticket-taking attendant thought I was cutting my high school classes!)

On to the movie.  The plot is pretty basic, probably because it's been done in real life many times in the past 100 years.  A group of mercenaries is hired to kill the leadership of an island currently run by a murderous dictator.  The client may have ulterior motives.  (There was a lot of this type of thing that happened in the 60s and 70s in Africa, and some of the mercs ended up fighting for purely personal motives, and being abandoned by their employers even before that point.)

One trailer shows a discussion between Arnold Schwarzenegger and cowriter/director/star Stallone.  Unlike many trailers these days, the entire story isn't given away, and the best part of the conversation isn't shown!  This is an extremely funny exchange, for which Willis is also present, and the only time Willis and Der Gubernator are in the film.

How much realism do we want in a movie?  Expendables finds a pretty good balance between the ultra-realistic movies like The Way of the Gun

and outright fantasy such as Shoot 'Em Up

.  The only perpetually unrealistic element is knife throwing, but I can forgive this when so many things are done right- such as depicting what happens when a small skilled martial artist fights a large skilled martial artist, or showing a rapid handgun reload without silliness like tossing magazines in the air or "self-loading" magazine pouches.  Stallone's Barney Ross shoots his 1911s about as fast as humanly possible, though his shots 4 through 6 with a single-action revolver might be faster than actually possible.  He also carries 3 sidearms, in addition to his rifle (for any non-gunnies: this would never happen). Terry Crews rocks an autoloading shotgun sometimes loaded with exploding rounds, but he's not running around with a Mini Gun a la Predator

Expendables doesn't take itself too seriously, but it's serious enough.  I think today was the first time I've ever seriously thought, I want a flying boat.  It's a little sad that Ahnuld isn't in condition anymore to throw any lead in this movie, but there's still plenty of action to spread around.  Couture and Austin aren't the best actors, but director Stallone wisely handles this by keeping their mouths shut almost the entire time, making them MUCH better actors.

I'm really happy Lundgren gets to be in a vehicle with a good script again, and he delivers.  Everyone does, though Roberts as an EVIL corporate overlord doesn't use his own martial arts abilities.  Jet Li provides very earnest comedic relief as well as kicking ass, and Mickey Rourke is just scenery.  Disturbing scenery.  He may not be acting. 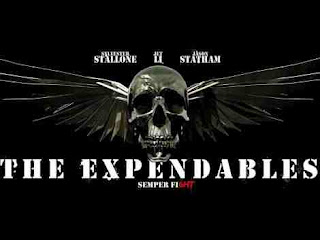 Really, about the only way this movie could be better, is if Steven Seagal and Jean Claud van Damme were in this movie, too.  And they were both gruesomely killed by Chuck Norris in a 30-second cameo.  An extremely enjoyable 4.5/5 stars.  Language, bloody violence, and a rollicking good time.
Posted by J.R.Shirley at 4:19 AM

Shootin' Buddy: "So, do you wan't to see this Expendables movie?"

Me: "Duh! It's, like, 120 minutes of non-stop explosions and full-auto gunfire! That's Best Picture material right there."

Thanks, I'll add it to the go see list!

A TMZ photographer asked Dolph if he was the most bad ass (something along those lines) guy in the movie and Dolph said that Couture probably was. The TMZ commentary said that you bad asses weren't the type to say they were and that Dolph has killed more people in his movies than anyone else in the Expendables.

Lundgren's subplot was the worst thing in the movie to me, and that sucked because I love Dolph Lundgren like an enormous, murderous son.

Couture and the Nogueira brothers (the General's bodyguards) are the baddest men in the film, but Dolph is an easy third (fourth if you count the Nogueiras separately.) He's a legit Kyokushin black belt, right? They didn't give those belts out to people who didn't fight. Dolph Lundgren had to beat on people and get beaten on for a long time to get his black belt, and he has continued to train in full-contact arts since then.

Anyway, I enjoyed the movie. It was bad in a good way, which is harder than it looks. When Jason Statham was in the nose of the plane, I remember thinking to myself "This will probably be the coolest part of this film, and that's OK."

Well, despite Jet Li being a great athlete, I would bet on Dolph in an unarmed fight to win 9/10 times. You may be underselling Daniel Craig, though.