Bubble gum and a dance beat.  What's to like?  Dunno, but I can't seem to help it.


If you watched that, and you're still here, you must be a glutton for punishment, so take some more!
Posted by J.R.Shirley at 12:39 PM 4 comments:

I've been out of our month-long academy for a few weeks now.  Watching shifts has been easier than expected, with only one of the four posts I've worked requiring a great deal of work.  Even that is welcome, in its own way- the time goes swiftly, and I got a great leg workout.  Most of my coworkers have been very pleasant, and I like most of the people coming through the gates.  (Well, there are some Marines, too, but no-one's perfect.)
Posted by J.R.Shirley at 8:53 AM 1 comment:

I rarely use my blog to rant, but there are times...

There is a leak coming from the neighbors upstairs. We almost always discover there's been a leak in the morning when we get up, but I heard water running a few minutes ago. It sounded like the shower upstairs was running, and water was POURING out. GRRRR. 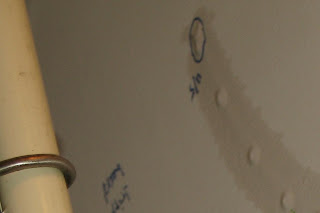 The owner was notified weeks ago, but as can be seen from the pics, large cracks are now developing in the ceiling.  It's actually been getting worse.
Posted by J.R.Shirley at 8:37 AM 4 comments:

Martial arts legend Dan Inosanto's daughter Diana Lee Inosanto wrote, directed, and co-starred in this 2008 movie set in the 1980s. I almost turned the movie off after the first two minutes, which look like they cost $50 to film. Fortunately, the rest of the movie doesn't look as noticeably cheap.

I was pretty sure I knew exactly what this movie would be like, and I expected just another twist on the wimp gets beaten, turns to martial arts teacher to learn to be a badass. While I was not necessarily wrong, the movie ended up being considerably more complicated than I expected. Several scenes were obviously based on real life crimes committed against homosexuals, and there were a few more twists I didnt see coming.

Low production value, but thoughtful and sometimes wrenching storyline. 3/5 stars. May be worth watching and discussing with older children, if you feel that vulgarity can be tolerated in the right setting.

PS- while I would never encourage reckless behavior towards others, if you're intolerant- you suck.
Posted by J.R.Shirley at 12:46 PM 1 comment:

Welcome to the Asylum

I have posted a few guest blogs from my brother Philip. Years ago, Philip created a primarily music-oriented bulletin board. The general topics forum was called The Asylum. The Asylum is now back in a mega-blog format, and I will be one of the authors.

Many of my readers are gun bloggers. This blog will be very light on any gun content, but you may find it interesting and worth reading. Language may be...unrestrained. If you're willing to find fresh perspectives, check it out.
Posted by J.R.Shirley at 9:28 AM 1 comment: