I have sadly seen an unusual number of CRXs in the last two months, reminding me of my thrashed Furious Bumblebee. I am now putting in resumes and applications for employment, but need a ride to keep a job...and need a job to be able to purchase a really decent ride. A considerable Catch-22.

So, I was looking online. I didn't really expect to have much luck with Acuras after having no luck with Hondas, but I found a high-mileage Integra in North Carolina. If it's in the condition the description and all the pictures indicate, I'll be driving it back tomorrow. It also seems that a B16A engine swap will be easy and reasonably inexpensive, giving me another 30 horses on a 2500 pound vehicle. But, all things in good time.

The Queen is dead. Long live the Queen!
Posted by J.R.Shirley at 8:06 PM 4 comments:

Welcome to Newbius. Links are to Newbius and 5th Down are growing in the blogpatch to the right.
Posted by J.R.Shirley at 11:30 AM 1 comment:

Yesterday: got a Bialetti stovetop espresso maker and a emulsion mixer.

On today's agenda: visit to Smithsonian Air and Space and picnic.
Posted by J.R.Shirley at 9:05 AM 2 comments:

Cheap at the Price

I was prepared to be fairly ticked when I went to retrieve my rental from the towing company. The car had been properly parked, and the visitor parking pass had been placed. When I got to the tow company, I was surprised and angered to find the permit was no longer in the car. What the hell?

It seems the heat had caused my visitor parking decal to shrivel up under the edge of the rear windshield, so I couldn't be angry at the towing company for not seeing it. Not their fault, and if the tow...and my skinned knee and ripped toe are the worst things that happen to me on this trip, I'm well ahead of the game.
Posted by J.R.Shirley at 3:14 PM 4 comments:

Yesterday: ripped off half the pad on my left big toe while sucking at volleyball. Also skinned and bruised my right knee before learning that the sand was only an inch and a half deep. ALSO apparently had my rental towed.

Today: black beans and eggs for breakfast. Venturing out to retrieve rental. Casualties may ensue.

I'm now safely in VA. If you don't hear from me for a while, don't send a search party, because I'll probably not go willingly.
Posted by J.R.Shirley at 10:32 AM No comments:

Blogging could be (read: will DEFINITELY be) light for a few days.
Posted by J.R.Shirley at 6:15 PM No comments:

In the Eyes of a Child

We were eating dinner, and little Dublin, who just celebrated his third birthday, grinned over at me with pizza sauce smeared across his face.
"Lie loo loo," he said.

I haven't stopped dreaming of a little brood of my own. That dream doesn't seem so very far away any more. 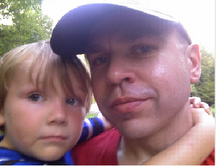 I had a bit of an annoying and frustrating afternoon on Saturday. I did have a *lovely* morning chatting with a special friend~ aw, hell, my girlfriend on the 'net early in the morning, but a pattern emerged a little later.

Delta planes to Atlanta were late. I was a bit annoyed at myself when I realized I had misread my 1:10 PM flight as 11:10 AM, but when the flight before my scheduled flight was over an hour late, I knew it wouldn't be good. And, yay verily, it was not.

When my flight finally hit the Georgia runway, I hurried to my gate (C28, I believe), hoping that somehow other Delta flights had been delayed, and I could make it. The young lady there sent me all the way to D35, where I was greeted by a cold stare by the woman at the counter before she finally deigned to take my ticket.

"Oh, that plane's already left," she said brusquely. I gritted my teeth.
I'm sure it has, since my flight from Dallas/Fort Worth was over an hour late leaving. She obviously could not have cared less.
"You'll have to go see customer care at D24."
Thanks, you useless bitch. At least the customer care representative on the phone after I reached D24 seemed sympathetic.

I was on standby for the next flight out. And on pins, ready to get the hell out of airports for the day. I was given the *last seat* on the airplane, and gratefully made my way on the flight- only to discover someone was sitting in my seat. Ah, man...

But it seemed she had just sat in the wrong seat. Less than an hour later, I was greeted by Davis' happy face, and not much later than that, I was enjoying a home-cooked meal. Big sigh of relief.

Sunday I picked up the title, and looked for the last time on what's left of my poor little car. Furious you were, Bumblebee. I will miss you. I had such dreams for you. And me. And...well, that sounds just wrong. Never mind.

Monday I started my active training with my Reserve unit. Tuesday I showed up at 0630 for PT. And made the mistake of working my legs very heavily. So of course we ran over three miles today. That'll teach me! But at least, I'll get to do some of the working out I had originally planned for Grand Prairie.

I hate moving. Have I mentioned I hate moving? Really. Leaving a military school is a small move, which means it's not as bad as a big move, but it's a move. And I...HATE...

Well, I left two of my towels because I was already short of room. If I hadn't brought *4* pairs of ACUs, and 2 pair of boots (per the packing list), I would have had plenty of room. Oh, well. 0500 came way, way, painfully early.

My mood wasn't improved by finding that everyone else had started our outprocessing routine early, even though we'd been told we wouldn't be able to...but I still was out in good time.

I was a little happier to be past the huge line at the airport and online. Despite the economic and other challenges we truly live in a golden age.

Ah, Grand Prairie. I barely knew you, and it was more than enough. Buh-bye. 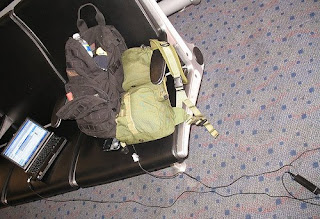