Imagine a sweet, dreamy, thoughtful movie...about people who have sex with animals. Sound like your cup of tea? Well, Zoo is for you. Honestly, I'm not much of a moralist. I often question or debate whether I'm really that "good" a guy. I'm human, I have faults. I've taken money from the government to kill people before, and I'm likely to do it again. I don't feel bad about this at all. I'm making a point about moral ambiguity. I'm just not that judgmental, especially regarding sexuality.

When it comes to sex, I only have a couple of rules I am perfectly willing to help enforce on anybody. For adults, sexual partners should be of age, and the sex should be consensual (the latter of course indicates that they are capable of giving consent, which must also mean they are a functional instead of just legal adult.) That's about it. The moral problem with having sex with animals is the issue of consent. Does Fido consent? Does Kitty? Does Flicka? In any case, it's icky. It's a frickin' animal, for Pete's sake.

Well, Zoo tells the story of a man who really loved horses, in one sense of the world. And we definitely know that one loved him back. Good and hard. Since the horse was definitely the active participant, this movie revolves around the man's death. The death, apparently, was a tragedy.

Okay, let's stop here. Hold on. Right or wrong, morally incorrect or not, the death of someone who lets himself get bred by an animal five times his size or larger is NOT a tragedy. It's Darwin in action. It's suicide by horse injection. He had it coming.

So, you know, if you want to watch the horse sex movie and listen to the quiet music and earnest dialog ("sometimes we'd have a bean dish, or some kind of meat") about how these nutty fruitcakes just love animals (We're "Zoo"!), feel free. Just be certain to laugh uproariously at the comedy of it all, and lament that the newspapers concealed the man (Kenneth Pinyan)'s name. He should have had "Horse @#$%er"- or, maybe, "Horse @#$%ed" painted on the side of his casket, as a lesson for other abysmally stupid people. 2/5 stars.
Posted by J.R.Shirley at 1:10 AM 16 comments:

Sound the "All Clear!"

Everyone has heard that the king is dead. The twisted, sad saga of flight and crash has come to an end. 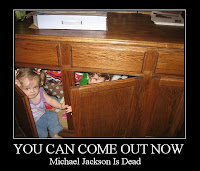 I drove at reasonable speeds on the way back to Augusta from Mobile. I had a really great time visiting my family. I was able to spend time with my favorite cousins, four of my five siblings, and three aunts and an uncle. I played "42" and "Acquire", and actually won my final game of the latter. I was able to see my little brother almost every day, and spend time with nieces and a nephew. I had the chance to help lend a hand for some moving and house remodeling my aunt and uncle were doing. I got to eat some good Southern Cooking.

Here are some shots from my trip.

Returning from a trip to see those dear to you is such a bittersweet experience. It's nice to return to one's niche, to the familiar and comfortable. It's also a bit sad to leave those you love. I'll be moving on soon, myself. We'll see what the future has in store.
Posted by J.R.Shirley at 9:06 PM 4 comments:

A post about the Hera GCC is up at Seek Cover. LAN World claims units will begin shipping in 6 to 8 weeks.
Posted by J.R.Shirley at 8:58 PM No comments:

I apologize for not posting more: my internet connectivity was down for about a day and a half. I should have a post up later today.

After almost exactly 9 hours of travel, I arrived back in Augusta tonight. I'll write about it later: for now, I'm going to get ready for bed.
Posted by J.R.Shirley at 12:17 AM 3 comments:

The Curious Case of Benjamin Button is a very romantic movie, if by "romantic" you mean magic and perpetually elusive fulfillment. Well done for what it is, and probably just the thing if you want to immerse yourself in the beautiful tragedy of existence. Don't watch it. 3.5/5 stars.
Posted by J.R.Shirley at 10:10 PM 1 comment:

Well, dolphins, actually. Big sis, little bro & co, me & a young friend of big sis went to the beach in Gulf Shores for a couple of days. After we arrived we took a "dolphin cruise".

The technique was pretty neat. The boats would line up parallel to each other, and sail at about 20 knots or so, generating a decent wake. The idea was to attract dolphins, who, like teenage surfers, evidently just love a good wake. Does it work? 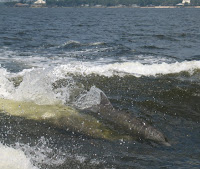 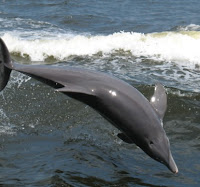 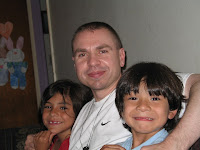 I was able to spend Saturday afternoon with my brother Randy, and nephew and niece. I know I'm prejudiced, but I think these two are the most beautiful children I've ever seen. Shirleys make pretty kids. Nessie is almost impossibly sweet, and little Junior...well, he's just like his father was at his age. Karma never forgets.

Randy made some of God's food, often known as barbecue, both ribs and chicken. It was a good day. 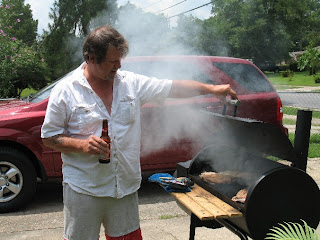 And it doesn't make a damn bit o' sense.

Let's say- for instance- that a character renowned for his logic makes an emotional, illogical, and almost certainly illegal decision and sends another crew member down to a zombie glacial planet, where he will (of course) meet Simon Pegg. Only the zombies, this time, will not be the Shaun of the Dead traditional zombies, but Resident Evil abominations. And, um, let's further say that a meganormous wolf-baboon is hard on the heels of this crewman- but a mutant blend of spider, dragon, and venus fly-trap kills the wolf-baboon. But instead of eating the larger baboon, which it has already killed, it instead chases the much smaller crewman.

Let's also say there exists a substance which will create black holes. A minute amount- a drop- of this substance is all that is required. Instead of taking this substance in a pre-packaged, ready to use platform, this super-advanced civilization instead takes an enormous amount of this substance on ship, necessitating an overly-complicated, long preparation process that seems more at home in the early 20th century. Let's say that all bad guys are handily identified with villain-y tattoos, and that any evil ships look like they're made of rusty razors and bad attitude. Let's say that anyone involved in a fight will automatically get into a fight utilizing their strengths, no matter how unlikely those skills are...well, you get the point. 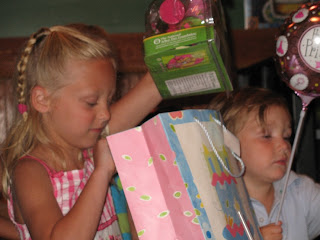 While waiting for everyone else to finish eating, little Dublin and I went for a walk. 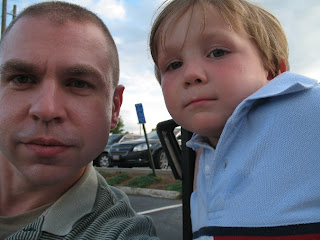 As I drove to Alabama, I listened to Van Halen and other cds. Ironically enough, I had a very concrete daydream about this. I thought perhaps it would make a good first dance wedding song- which might perhaps prove I am, despite my educational level and inclinations, ultimately a white-trash 'neck...

Blindness looks like a catastrophe or science fiction flick. Watching a couple of previews gave me the impression that some form of plot was at work. I'm not going to give many spoilers here, but focusing on apocalyptic scenarios or science fiction paranoia is not at all the point of this movie.

Blindness is about what it means to be human, with all the good and bad that implies, and how people may act when the society we know ceases to function. This is a gritty movie, and if you're very sensitive to language, violence, or sexual situations, this is definitely not the movie for you. This is NOT a kids' movie by any stretch: not that many teenagers would enjoy it, in any case. It is a movie worth watching, though: I'm just not sure how many times I could take it. 3.5/5 stars.

Defiance is another movie about being alive, but with a different message. Based on a true story, Defiance stars typecast tough guys Liev Schreiber and Daniel Craig as Jewish brothers who almost accidentally end up leading a huge community of Jews in the wilderness during World War II. While not certain how Schreiber first came to be cast into bad-ass roles, it is certain that he plays them well. When he comes against Craig, though, there is an obvious winner, as Craig manages to exude a very real menace while still seeming three-dimensional. (As a side note, Craig would be the obvious choice to play Patricio Carrera if Tom Kratman's A Desert Called Peace is made into a movie in the next few years.)

Craig is a superb actor, though his accent at times seems better suited to an Irishman than a Polish Jew. Schreiber does his usual fine job, with a better accent than Craig. Like Blindness, there is a good deal of grim in this movie, but it is an inspiring lesson, and I think will hold up well to repeated watching. 3.5/5 stars.
Posted by J.R.Shirley at 4:34 PM 2 comments:

A post describing the M50 Ontos, M56 Scorpion, and M551 Sherridan is up at Seek Cover.

It is sad but probably to be expected that what was almost certainly the best system of the three may have seen the least use.
Posted by J.R.Shirley at 3:08 AM No comments:

A new system designed by University of Florida professors will sniff health workers' (or potentially others) hands for soap fumes. HyGreen would be installed near sinks, and workers would pass their hands underneath the detector after washing.
Posted by J.R.Shirley at 2:14 PM 1 comment:

So, since I have the means- and Matt told me to do it- here's a pic of the new 'do. Since I'm often so somber, I thought I'd show one of me smiling. 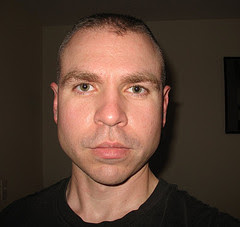 What do you think? Is it too festive? Be honest. I can always take another with my usual scowl.
Posted by J.R.Shirley at 10:53 PM 8 comments:

Today I gave up on finding my card reader and bought another one while I was at Wal-Mart. Since they're both made in China, I'm not really sure why the one from Wal-Mart was twice as much as my last one (which was a swoopy green, too)! I have noticed a tendency recently for Wal-Mart to frequently not have the lowest prices on an item. I'm going to say that's because they undercut the competition enough for them to go out of business, and now Wally World can raise their prices.

Anyway, here are pictures of Big Momma and Baby. Big Momma's picture looks odd, but then, so does Big Momma. 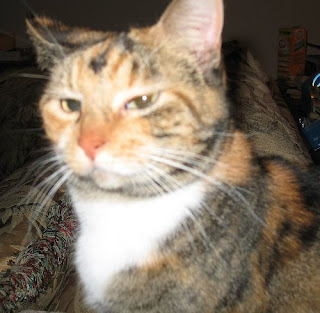 Baby is lying atop her favorite toy. She'll bring it to you in case you forgot she has a toy you should be sharing with her! 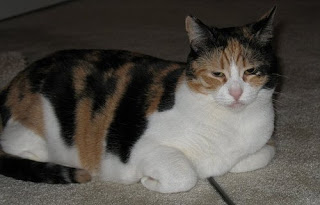 Reason #228 dogs are better than cats: a good dog who is given reasonable potty breaks will not pee on your carpet. I *know* even a cat should be able to tell the difference between carpet and cat litter. These are some of the coolest cats I've met, and they still are down around the level of the worst dogs, when it comes to likability. Except for Chihuahuas and Chows. They, like almost all cats, are pure spawn of the fallen one, or something.
Posted by J.R.Shirley at 10:28 PM 3 comments:

I went to what I used to call a "ranger flat-top" cut on Saturday. I have been advised by the barber it's actually a "high and tight flat-top". Maybe pics, sometime...
Posted by J.R.Shirley at 6:56 PM 5 comments: