I received my evaluation today. It was done hurriedly at my request, since my budding book club begins at 2:40. Rated satisfactory on all counts. That's probably a bit better than I'd rate myself.
Posted by J.R.Shirley at 7:10 PM 1 comment:

Save Us From Your Followers

It comes to me, again, that one of the biggest problems with Christianity are the Christians.
Posted by J.R.Shirley at 4:11 PM 1 comment:

Dr. Arblaster was kind enough to reply here to a question I posed.
Posted by J.R.Shirley at 8:13 PM No comments:

US pledges choppers to Mexico

The United States has pledged $80 million to help the Mexicans buy Blackhawks to use fighting drug cartels. Ms. Clinton says the U.S. shares some responsibility for the drug trade, since demand for illegal drugs in the U.S. helps fuel the war in Mexico. The article states again the non sequitur idea that rocket launchers and grenades in Mexico are the result of the legal gun trade in the U.S. This could only be true if there was no regulation of these items in the United States, which has not been true for over 70 years...
Posted by J.R.Shirley at 11:57 AM 3 comments:

Heard in the Distance

Some things change. This is the way of life. There are times when I am briefly able to view humanity as I imagine a truly all-loving god would. In these times, love is the only feeling that matters, for any transgressions or faults are as nothing compared to the immensity of love felt. It would be beautiful to always feel that way, I suppose.

Here is a picture from a little over four years ago, from New Year's Eve, 2004-2005. If I let myself, perhaps I can just love the faulty, fragile humans in the picture. If you love enough, forgiveness isn't even a question. 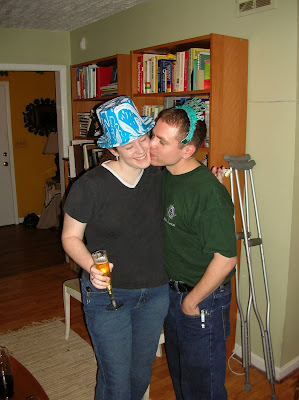 I have added a link to one of Paul Arblaster's blogs, Beyond Brussels, to my blog links. Dr. Arblaster is a literature expert and translator who wrote A History of the Low Countries. This book is notable for several reasons, the most important of which, is that it's not horrible.

Let me explain. Literature experts tend to write history badly, even when their methods and research are sound. A well-known example of history by a literature expert is Edmund Wilson's To the Finland Station, a perfect storm of all things that could possibly be wrong with a history book. Wilson was an obvious admirer of Lenin, and so deliberately only consulted sources that would give a complimentary picture of him and communism. It is too long for what it purports to show, and it is badly focused. An additional trait shared by Valerie I. J. Flint's much more historically sound The Rise of Magic in Early Medieval Europe is the odd inability (for a literature expert!) to write clear, simple, strong sentences. Their prose reminds me of my own in high school, or the way I write sometimes when I'm extremely tired, but trying to make a deadline.

In any case, A History does not suffer from these faults. While it does not have endnotes or footnotes, this will certainly make the material more approachable for the interested layperson.
Posted by J.R.Shirley at 10:59 AM No comments:

Labrat at Atomic Nerds posted an absolutely incredible essay yesterday. The Nerds are frequently funny, and often wise, but this is my favorite serious essay from them yet.
Posted by J.R.Shirley at 10:17 AM No comments:

Please Allow Me to Introduce Myself

Saturday was my first battle assembly with the reserve unit I've signed into. I stay busy, and allowed myself to be distracted with trivialities (you know, school, school, friends, and evil students) until the last minute- when I realized that, with my stuff spread over three locations, I didn't have a cover (headgear, for you non-mil types), unit patch or rank! Not exactly the way I want a new unit to meet me.

Saturday morning was colder than I'd expected, which meant an extra few minutes cleaning ice off the Furious Bumblebee's windshield. I buzzed to the unit, hoping I wouldn't add tardiness to my list of the morning's transgressions. I hit the parking lot going considerably faster than prudent, and whipped around a couple of soldiers. As I passed them, I realized one was...the command sergeant major. Oh, no.

I piled out of my car and introduced myself and my "challenges" to another Spec-4 I saw, and then the Sergeant Major arrived. Gulp. He calmly told me safety was a priority in his unit, and advised that running over the sergeant major would not be a good introduction.

My new Spec-4 buddy loaned me a beret, so I only looked partially jacked up when I got in formation. The first sergeant asked new soldiers to raise their hands, and then posted me in front of the formation after I sheepishly raised my hand. Ah, man.

Anyway, it got better from there. It pretty much had to.
Posted by J.R.Shirley at 8:26 AM 5 comments:

Thanks to Matt, I discovered Picture is Unrelated. I think my two favorite pictures so far are the Nazi Yeti

Vampire 06 (six indicates the leader of an element) posts a touching essay on cultural sensitivity in Afghanistan...
Posted by J.R.Shirley at 10:29 AM 2 comments:

The New York Times reports a new combination high school and community college will open in Brooklyn in the fall. The five-year program at City Polytechnic High School of Engineering, Architecture and Technology will provide students with both a high school diploma and associate's degree. This will allow students to reach this educational level a year faster than traditionally.
Posted by J.R.Shirley at 8:31 AM No comments:

Georgia Representative State Representative Tim Bearden filed a lawsuit to stop the city of Atlanta from arresting concealed carry license holders who carried on public transportation or in the public areas of airports. These actions should be legal according to new Georgia law HB 89. The lawsuit was dismissed, and the dismissal was upheld in federal appeals court (according to the judges) because the law was not meant to include airports.

This is a bit odd, considering Tim Bearden wrote the bill and should know what he said, and very clearly, what he meant. Full story here. Idiots and fools. At least we can see there are a few good politicians in the state.
Posted by J.R.Shirley at 3:22 PM 1 comment:

And Your Whispering Eye

I had a couple of friends over for dinner Thursday night. We watched Role Models after a nice walk.

Paul Rudd and Sean William Scott work brilliantly together, often delivering hilarious deadpan lines to Jane Lynch, lines good enough that they seem completely natural. I have yet to see Rudd play an unfunny role, and he doesn't disappoint here. All actors deliver yeoman work. Some of the plot elements are predictable, but that's not always a bad thing. If you can handle crudeness, language, and a bit of nudity, watch the movie. 4 stars.

I watched Watchmen Friday night. What follows will probably be my shortest movie review ever. Here it is: What a waste. I give it 1 star for good special effects and half a star for one interesting character.

I watched Pineapple Express recently. Seth Rogen is properly known for his comic roles, and James Franco fills his own role as a stoned pot dealer. The plot works well enough, but what propels this from a very decent 3.5 to 4 stars is some incredible dialog, typically given by Seth Rogen. Violence and language and frequent drug usage.
Posted by J.R.Shirley at 11:39 PM 3 comments:

Battlegrounds for the Mind

We had six bomb threats that I'm aware of at Buttress this week. The first found us sweltering in the sun in the football stadium for two hours. The others have kept us locked in our rooms while the halls were swept with K9 units and sheriff's deputies.

In other news, I am considering not renewing my contract...
Posted by J.R.Shirley at 3:25 PM 5 comments:

I helped a friend assemble an AR-15 lower receiver this weekend, along with all the other stuff I did. Neither of us had ever put one together before.

A friend of mine calls them expensive jigsaw puzzles, and that's about right. With the help of instructions from AR15.com, we probably got it done in a little over an hour. A good part of that time was spent trying to force one or two little bitty springs and a tiny piece of metal- a "detent"- into their proper place. More frustrating than actually hard.

I'm not usually good with small complicated things, but I encourage anyone who's considered building their own AR rifle for defense, sport, or hunting to give it a try. I'll definitely build another when I have more money and time.
Posted by J.R.Shirley at 8:36 AM 10 comments:

Another week has ended, and a new one begun. Saturday afternoon I was at a friend's house, when his children began squabbling. The oldest, Brad, is a tough kid in a lot of ways, but tends to be abusive, manipulative, and cries if he's even addressed regarding misconduct. He was put in time out for a few minutes because he had been poking his two sisters with a stick.

Now, suicide is a serious issue. Claiming to want to commit suicide in an attempt to get your way when you're eight years old will not fly. When Brad started saying, "I'm gonna kill myself," as he sat in the chair in the back yard, I walked outside.

The weather has warmed up nicely in the last few days, but pools haven't had time to really elevate their temperatures much- which means the pool was extremely cold when I tossed him in the deep end. The kid can swim, and I was ready in case he suddenly forgot how, but I thought it might change his mental state. He came up spluttering and swam to the edge, mumbling even faster:

I got him dried off, gave him a change of clothes, and took him and his sisters for a walk. Kids.
Posted by J.R.Shirley at 8:37 AM 7 comments:

On Thursday, Austin, Texas approved plans for a massive 30-megawatt solar plant, according to Forbes.com. The facility is expected to be completed by 2010, and to have the capability of powering 5,000 homes a day.
Posted by J.R.Shirley at 3:03 PM 1 comment:

Observant readers may notice there are three Van Halen songs to the lower right of the page. I inexplicably went through a couple-hour phase of listening to Van Halen on YouTube last night. To me, many of their songs have a sound that- despite at least one of the three shown being first sung in the 70s- is signature 80s, with everything good and bad that implies.

Firmly. The Chang'e I made a deliberate hard landing on the lunar surface 1 March. The planned Chang'e II mission in 2011 will include a lunar rover.
Posted by J.R.Shirley at 12:11 PM 3 comments: