Mr. D and I let students sit in our classroom during the lunch period. We'll take turns eating and helping students with work on most days.

During lunch today, some little twit seems to have grabbed my binder. It held my logs detailing all the days I've attended Buttress, various handouts, and school information. I'm not saying I'm not happy, but I am saying, I'm not happy about this.
Posted by J.R.Shirley at 8:29 PM 3 comments:

On the Blessings of the Cow, I

I like cheese, but it sticks to things
Bowls, forks, plates,
and presumably,
My arteries.
Posted by J.R.Shirley at 8:27 PM No comments:

I walked out of Kroger tonight, and the cool breeze hit me, both soothing and invigorating. I ached for a rifle in my hands and the deep woods.

I dash
Into the early morning chill
My mind shrieking in fear
And my soul, in exultation

My long strides eat up the dawn

I must find my pace again
Posted by J.R.Shirley at 6:09 AM 2 comments:

I don't know if I've taken this particular test before...

and The Walls Came Tumbling Down!

We had a field trip Friday. Thirty-one students and Mr. D and I went to the oldest house in Augusta, and then to the local history museum. Our time was cut somewhat short by discovering that our bus driver had to be at another school by 1430. Still, the day was lovely, sunny but with just a tiny, beautiful taste of early Fall cool.

There was a faculty meeting after school. Dr. R. had the dubious privilege of finding he was being transferred in the Augusta Chronicle yesterday morning. The Richmond Country superintendent spoke after Dr. R. announced to us that he was being moved. Doctor Super reminded everyone that Buttress hadn't made any of its academic goals last year, and combined with the numerous fights this year, he claimed there had been many calls for action. DS also apologized for what he characterized as an unintended leak to the press.

I really have to say: if I were in the Super Shoes, if I was forced to confirm that one of my employees was being moved in this manner- and that employee hadn't been notified yet- you'd better believe I would be on the phone to that employee as soon as the press hung up. I suppose that's just too Super Simple.

Every day I expect less,
But still too much, I guess

I usually avoid talking a lot of politics here. I also rarely surrender to flag-waving emotionalism. The following is an obvious political plug, but the creator of the video earned the right to speak his mind about the subject.

, and Then You Die

I awoke yesterday morning, thinking that the sun was shining much too brightly. A glance at my cell phone informed me that I should have walked into Buttress High School six minutes previously. Uh-oh.

Thursday we had a very large fight involving thirteen students at Buttress. As I walked towards the office door Friday, I was startled and somewhat chagrined to see three Richmond County Sheriff's Department cruisers parked in the bus loading area. Dr. R. told me that there had been "credible threats" made, so without notifying him, the sheriff sent a bunch of deputies. I could tell this was going to be a wonderful day.

After teaching a few very rambunctious classes (one student was especially upset that I had called his grandmother to let her know he had been using the "n word" in class), I left early to make it to ASU for a seminar. As I drove, I opened the center console panel, and went cold inside. My .44 Special was missing.

I was almost to the college when I realized that my ACU bag I brought back from OEF was missing, too. I stopped at the college briefly, but in my state of mind, I knew I wouldn't get anything out of the lecture. I drove home just to double-check, and then called in a police report.

I was at "College Days" Thursday night especially to visit and talk to representatives from the University of North Carolina at Chapel Hill. Chapel Hill was one of only a handful of colleges that cancelled. While parked at the Civic Center, my bag with my computer and several books, as well as my .44, were stolen. The deputy I spoke with said that my battery for my remote might be dying, as when this happens, I might get an "armed" chirp without the doors actually locking.

Makes me sick, guys. I suppose this is the way of the world, that many, if not most, people will take what advantage they can, but that laptop has school and personal writing, and some pictures, that are irreplaceable. Theft sometimes not only takes things of value: sometimes it takes pieces of your life.

Lest anyone think the previous was just an iguana story, here's the proof.

After securing the iguana. 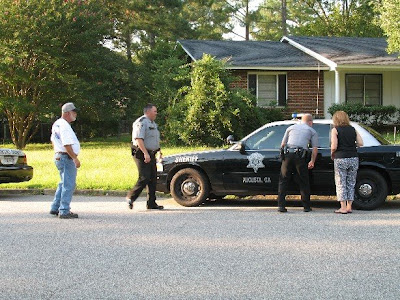 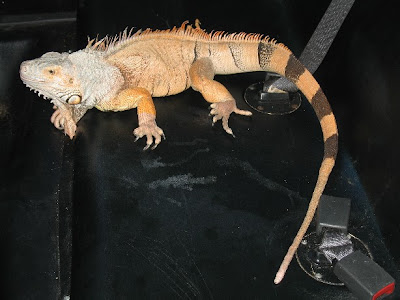 Long Arms on the Lizard

I had arrived back at the house after work, and was sitting in my car listening to the radio for a minute. As I climbed out, movement caught the corner of my eye, and I turned and looked to see a 3 foot plus lizard stalking slowly through the grass of the lawn across the street! I walked a little closer and was bemusedly looking at it when a red Ford pulled up to the house. I waited until a middle-aged gentleman got out, and called over:

Hey! Did you know there's an iguana in your yard?

He looked confused, and walked closer. "What?"

Look at the base of that tree.

Well, iguana aren't apex predators, so I felt fairly safe from the big guy, who actually looked to my eyes to be about 3'5". I called my brother Randy and spoke with him for a few minutes to be sure I wasn't looking at something like a monitor. I told my neighbors that the iguana wouldn't hurt anything, and that I would probably just wait until he came down the tree he had just climbed and then call animal control before it got too cold this Fall, but they'd already called the cops.

I went across the street, and inside. A few minutes later, there was a knock on my door, and when I stepped outside, a sheriff's deputy from the Augusta County Sheriff's Department was there.

I spoke with the deputy for a couple of minutes, and then offered to pick up Iggy for him. I snagged a handy piece of PVC to hold his head down, and was slowly sliding it over and past his head to hold him down when the deputy told me that animal control wasn't actually on its way, and that he wouldn't be taking the thing out of his car! I stopped my efforts until another, very young little deputy showed up.

We were told animal control was indeed on its way, and I helped Deputy Wilkerson catch the iguana, and then he carried it to his cruiser and made the call:

I had a lovely conversation with Roberta X today. She has been added to my blog links.

On a somewhat connected note, it's wonderful to find people who actually love English.
Posted by J.R.Shirley at 11:34 AM 5 comments:

I had not been at all excited about this election. This changed with the selection of Sarah Palin for VP candidate.

Here is the full text of Palin's speech to the RNC last night.
Posted by J.R.Shirley at 8:21 AM 2 comments: