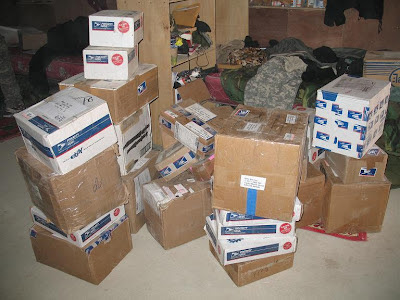 We often don't have fresh fruit here, so I supplement with dried fruit friends and family send me. Last night, I ate the last of my blueberries. I noticed that I was not only out of fruit, but that I was also almost out of good reading material again.

I spent more time with the cooks around the punching bag than I'd expected, but I finally laid out the clothes I'd change into after my shower, grabbed the SciFi compilation I'm reading, and did my time on the treadmill. After a few minutes of stretching, I stalked back to the B hut to grab my things.

I was stepping out of the door, with my clothes and shower things, when Sergeant Liddy walked up. He looked mildly annoyed, as usual.

"Shirley, you need to help get your **** out of the vehicles. You've got a ton." I hadn't realized we'd be getting mail, but we were. I dropped my clothes, and trotted around the Hesco barriers that have finally been erected in front of our B hut, and around to the HMMWVs, where stacks of boxes were being unloaded. Myers shook his head. "Somebody must really love you."

I laughed in disbelief as Warren walked by with the fourth armload of packages. He snarled at me.

Eventually, there were something like thirty boxes stacked on and around my bed, not counting smaller packages holding a book or cd, and regular envelope mail. I had five boxes full of books from my friend Ryan at the Army Heritage Museum, and another box of books from my cousin Pam.

I received enough hot sauce to last me for a year of solo consumption. I got enough dried fruit, even after giving away some, to last me the rest of my time here. I got shirts and lighters and cigarettes, stacks of tea, homemade bread, various nuts and snack mixes, and jerky. I even got some really cool stuff like Apricot Habanero jam and some Blenheim ginger ale from Jordy.

Warren was sulking on the bed, but he perked up when I pulled out a wrist rocket slingshot, and tossed it to him. (He verified later that jawbreakers do indeed vaporize when hitting a hard surface at high speed.) He quit smoking two weeks ago, so he happily accepted several packages of sugarfree gum. "Oh, hell, yeah," he said, as I placed a retail box full of Skittles and Starburst by his bed.

Two entire large boxes were full of hygiene and medical products from a doctor in Texas. (About a third of that box has been given to the ETT medic.)

There are now girl scout cookies in our little MWR, along with what has grown in one afternoon from a fledgling to respectable (or, would be respectable if Ryan hadn't apparently sent every Mack Bolan novel ever written- balanced somewhat by serious military history books) library. The ETTs in their spartan- but surprisingly expensive- base across the way have been gifted with boxes full of goodies and supplies. Our little chow hall now sports what is undoubtedly the best selection of hot sauce in the country, and the cooks each received a chocolate bunny.

Somehow my time has slipped away, but I'm going to sleep greatful and happy. Thanks so much for every one of you who has supported me or other soldiers. It really does mean a lot.
Posted by J.R.Shirley at 2:24 PM

I didn't get a box in on this shipment, and have been feeling bad about it.

I'm glad many others are taking up the slack I left. :)

John, Thank You for your service to my nation, and my family.

PLEASE tell me that my box 'o' books made it this shipment. If it did, there is a DVD that is FULL of e-books at the bottom too. Next box will have at least one log of cope too. I don't dip, but some cope now and then can get you through some sheeit, bro.

John, consider me "thanked". And again, Thank you for your service.
I'm off to Killeen again this morning. Keep Well, my friend.

Matt, the your clan was well represented. I still need to send Holly an thank-you email. Unfortunately, with so much received at one time- and the need to quickly clear much of it out of our small hut- it's hard sometimes to remember everything in a single package. But, it's all appreciated.

Matt, thank YOU and many others like you for keeping my country in good hands when I can't be there.

You're the one a world away from your new bride, consuming poisons to pass the time and keep alert while risking burns to the hand to keep from getting shot.