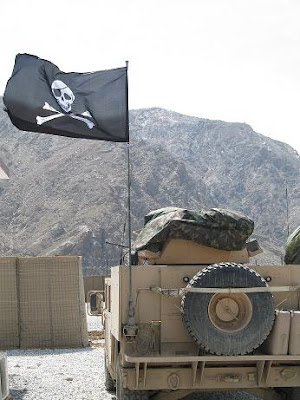 Last week, the new @DA was about to leave on their first mission out here. I walked out, and saw that the "war wagon" was flying the Jolly Roger. I walked back into our B hut.
"Hey, the war wagon is flying the black flag. The skull and crossbones, the Jolly Roger. A big one, too."
"Yeah," said Tony. "It's too bad they're pussies."

We got up this morning before 4 AM to prepare to support a mission. Of course, it was close to two hrs before our troops rolled out, while we were dressed and fully prepared in less than 15 minutes, with all our data ready on the guns. And then, we waited, of course.

I portioned out enough multivitamins to last the rest of my time here, and gave the rest to Fareed, one of the base defense guys. I also gave him two bottles of vitamins to give to the two local nationals who do our laundry. Fareed really wants to move to the States. I'm afraid of a Hmong-like backlash against those sympathetic to the US if the US withdraws from @fghanistan.

A few weeks ago, I was talking to Fareed while a general was visiting. I told him it was years before West Germany was able to run itself, and I hoped that the US would have the national patience to wait long enough that @fghanistan could govern itself...but that I doubted it would happen.
"I got to get out of here, man," Fareed said. "Or these ********ers are gonna kill me." I hope the US doesn't abandon its allies here, as it has abandoned so many others.
Posted by J.R.Shirley at 12:49 PM

Traditionally, the Jolly Roger means that those who are under it are pirates. It was often followed by a red flag, meaning no quarter.

I frankly don't like to see that kind of flag over U.S. soldiers.

...and, as Tony indicated, it's rather ironic flying over this Group...

With the Liberal sentiment of Cut and Run in Congress it may happen. I hope it doesn't, and I have written my Congress critters expressing my opinions on this matter.
Let's hope enough "Right-thinking" Americans can make a difference.