Three days ago, I went on a B*gram run. I expected to have a long and uncomfortable ride, but was pleasantly surprised. The rain stopped soon after we headed out, so I wasn't drenched, and I only fumbled with the unfamiliar M2 for a minute or so before I was able to get it running for our test fire.

Some of the "little things" make a big difference in soldier outlook. I was tasked to pick up either Copenhagen or Skoal Original, Fine Cut, along with a few other things like DVDs. Deke, the Psyops guy I rode with, told me everything opened at 0900, so I left the Special Ops area and walked over at about 0845. The "spa" was open, so I got my first professional haircut in three months from a lady from a former Soviet republic, who spoke no English. She did a pretty good job, even if the top's a little shorter than I'd wanted. 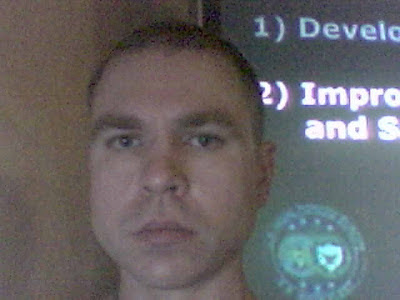 After the haircut, I visited the PX...which didn't open until 1000. I was glad I'd brought Red Dragon with me. (On a side note, Thomas Harris is an incredible author, even if his outlook on human interaction is more realistic than I might like.) As the flood of service members swept into the PX, I went immediately to the dip. Instead of the 6 rolls I had been tasked to buy, I was only able to purchase 2 cans. Oh, well. I also picked up some more running shoes to replace my crumbling Asics.

As we left to return to base, I was carefully watching the people crowded just a few feet away as we rode through the city. I was so focused on watching people, I didn't pay enough attention to my muzzle clearance, and my .50 smacked the side of a truck, spinning my turrent and me with it. Fortunately, I wasn't injured, nor was the big fifty.

The rain began on the ride back.
Posted by J.R.Shirley at 1:22 AM

Glad to hear you, nor the .50, were injured.
Thanks for the 'slice of life' description of a shopping trip there in Deployment land.